The Jurassic World Employee Handbook is a 96-page book in the style of what an employer would give to an employee regarding rules and regulations of their place of work. It is written from the in-universe perspective of Claire Dearing asking Owen Grady for his opinion on the book before it is handed out to employees, thus it has small notes from Owen scribbled among many pages throughout. The book was written by Gina Gold and published by Studio Fun International on May 15, 2018 as promotional tie-in material for Jurassic World: Fallen Kingdom.

Before the table of contents, the book begins with a letter from Claire to prospective employees that describes what the job entails and that it should be taken very seriously. Owen attached a sticky note that suggested Claire lighten up a bit and mention that if she could rise up the ranks, anyone can.

The following sections are held within the book:

A scribble from Owen on the page reads: "Employee sounds so subservient. Maybe something like team member is better?"

Included in the introduction is a letter from Mr. Masrani talking about the purpose of Jurassic World. A couple lines from the film are repeated here. One page lists some of the park's statistics.

Owen's scribbled note reads: "If only folks knew how many dinosaurs there actually are on this island..."

The section would then go on to list must-know facts about the park:

This section lists facts about dinosaurs in general, and individual dinosaur profiles. The following species are highlighted (in this order):

There is a page for the Indominus rex, but it's shown as a "top secret asset." Owen says he's not a fan of playing God like this.

Expandable pages for Paddock 11 and a dinosaur size chart conclude the section, although the size chart has basic abstract shapes of the dinosaurs and does not include any numbered stats.

There is also an expandable flowchart showing the management structure of the whole park.

Here an employee would learn what is expected of them, the standards of conduct, dress code, expertise, background checks, termination, and how to get meals using their employee ID.

It is noted that the ferry is the only method of transportation to the island and that employees should book their rides in advance because they fill up fast. Claire mentions to Owen that she's thinking of including a caveat that if an employee misses their ride, they lose their job (no exceptions), but Owen rebuts that it's too harsh.

At the end of the section is a "confidentiality agreement" going over everything an employee must keep from the public, which is essentially anything that isn't public knowledge already. Following that is a slew of coloring book pages and recommendations of the best places for an employee to eat at on the island.

Several aspects of the park's safety is covered under this section, including the control center, routine incidents, and paddock safety. Gyrosphere Safety details the safety features of the attraction. Laboratory Safety mentions a second required reading item titled the Hammond Creation Lab Safety Manual that all lab workers receive. Asset Breach describes the scenario of an animal escaping their enclosure, and explicitly states that ACU is only allowed to use live ammunition when an asset "cannot be contained and poses a clear and present danger." Earthquake or Volcanic Eruption describes what happens in the cases of natural disasters, mentioning shelters for visitors to go in the cases of these happening; the shelters would have enough food and supplies for up to a week.

There is an expandable flowchart showing "code red protocols" and then each "code" used by security.

This section details how the dinosaurs are made, from DNA to genetic science. Dr. Wu gives a short tour of the lab and talks about the ecosystem of the island and keeping it clean and pure.

The first page is a letter from Claire reminding the employee that there is a lot to learn about the park and to read the handbook more than once. An artist's rendition of the Jurassic World gates is shown before a third page displays an acknowledgment that requires the employee's signature that he/she read and understood the book. 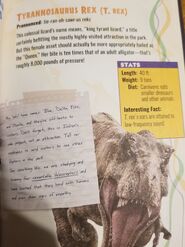 T. rex profile page.
Add a photo to this gallery

Retrieved from "https://jurassicpark.fandom.com/wiki/Jurassic_World_Employee_Handbook?oldid=230341"
Community content is available under CC-BY-SA unless otherwise noted.