The Jurassic World Lagoon was a lagoon in Isla Nublar created to house Jurassic World's Mosasaurus. It contains a total of 3,000,000 gallons of water.[1]

The Jurassic World Lagoon was created around during the construction of Jurassic World[2] where a Mosasaurus was placed there.[3] An aquarium was built around it to allow the visitors to have a safe close look at the Mosasaurus residing in the Jurassic World lagoonz in the Underwater Observatory. Visitors could also view the Mosasaurus by attending the Mosasaurus Feeding Show by sitting in a tribune above the lagoon. The tribune would then descend so the attendants could see a full view of the titular Mosasaurus.[3]

At the end of the battle between the Indominus rex, the park's veteran Tyrannosaurus rex, and Blue the Velociraptor, the Mosasaurus beached itself to catch the hybrid in its jaws and dragged it to the bottom of the lagoon, thus killing it and saving the park.[3]

Months later, a submarine was sent down to the bottom of the lagoon to retrieve one of the bones from the I. rex. Although they succeeded, sending the bone to the surface, the sub was attacked and sunk by the Mosasaurus, who also leaped out of the water and ate mercenary Jack as he clung to the rescue ladder of a helicopter flying over the lagoon and then escaped out the lagoon gates (left open for the sub) into the open sea.[4]

Above the northeast side of the lagoon.

The Underwater Observatory inside the lagoon. 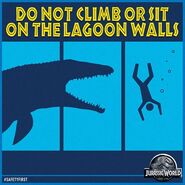 The Mosasaurus Feeding Show at the Lagoon

Mosasaurus about to eat a shark

Shark being hang above the lagoon 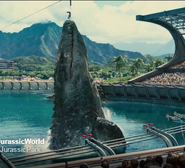 Monorail over the lagoon

The Jurassic World Lagoon is seen in Jurassic World: The Game as well as the Mosasaurus that lives inside of it. However, the Jurassic World Lagoon's appearance in the game originally was purely cosmetic, meaning the player can not create animals, buildings, and/or decorations for it nor can they collect earnings from the body of water. This was until September 30, 2015 when the Mosasaurus tournament appeared where the player can win a Mosasaurus to add the the lagoon to be an asset to the park. The lagoon in-game is divided into 3 large biome enclosures, one for each different type of aquatic animal- Surface, Reef and Cave. It also contains arenas used in events and PVP battles.

Then, in December 11, 2015, 9 more aquatic creatures were added to the game, which can be switched between each other at the lagoon where the player can feed and evolve them separately. The new creatures were Ammonite, Dakosaurus, Dunkleosteus, Kronosaurus, Leptocleidus, Psephoderma, Megalodon, Prognathodon, and Styxosaurus. 8 more creatures were added on March 16th, 2016: Baculites, Geosaurus, Helicoprion, Liopleurodon, Mauisaurus, Plesiosaurus, Trinacromerum, and Xiphactinus.

Archelon was added to the game as a limited edition tournament creature on April 15th, 2016 which must be unlocked by winning a Archelon pack from either the roulette or if the player places in the top 1% of the Archelon tournament.

Edestus was added to the game as a limited edition tournament creature on September 9th, 2016 which must be unlocked by winning a Edestus pack from either the roulette or if the player places in the top 1% of the Edestus tournament.

The normal aquatics Elasmosaurus and Protostega and the VIP's Giant Orthocone, and Plotosaurus were added into the game on October 19th, 2016.

Bananogmius was added to the game as a limited edition tournament creature on November 25th, 2016 which must be unlocked by winning a Bananogmius pack from either the roulette or if the player places in the top 1% of the Bananogmius tournament.

The 2 new normal aquatics, Onchopristis and Dolichorhynchops were added on December 7th, 2016.

Umoonasaurus was added as a limited edition tournament creature on March 10th, 2017 which must be unlocked by winning a Umoonasaurus pack from either the roulette or if the player places in the top 1% of the Umoonasaurus tournament.

The VIP-exclusive aquatic animal Rhomaleosaurus was added on June 20th, 2017.

A legendary surface Kaiwhekea was added on September 21, 2018.

A VIP Exclusive cave creature Tusoteuthis was added on April 19, 2019.

Suchodus was added as a tournament cave creature on August 2nd, 2019.

Leedsichthys was added as a legendary cave creature.

Hyneria was added as a legendary cave creature.

The lagoon as seen in-game

The Mosasaurus silhouette visible in the lagoon

The Mosasaurus swimming in the lagoon.