Kaprosuchus, also known as the "boar-croc", is a crocodile from the Late Cretaceous of North Africa. Unlike most crocodiles, it has long canine teeth, much like that of the modern day wild boar and was a more terrestrial hunter.

Kaprosuchus can be created in the Glacier Park of Jurassic Park: Builder, though it requires dino-dollars purchase. The game's Kaprosuchus has spikes on its back, which has not been found in the real animal from all the fossil material known of Kaprosuchus. It had the Megistotherium, Smilodon, Thylacoleo and Thylacosmilus animation to show its' terrestrial lifestyle. 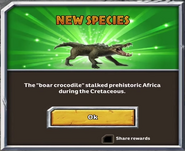 Kaprosuchus can be created in Jurassic World: The Game as a super rare amphibian even though it was a terrestrial crocodile. The game's Kaprosuchus has spikes on its legs and one spike on its chin, which has not been found in the real animal. When Kaprosuchus is in its pen, its tail rests on the ground. While other crocodiles did this, its unlikely Kaprosuchus did this. With the legs under its hips like a dinosaur and unlike a semi aquatic crocodile, Kaprosuchus' tail had to be above the ground for balance. 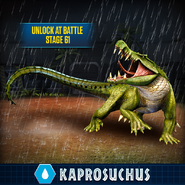 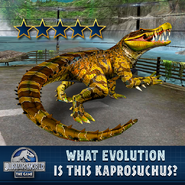 Concept of a max level Kaprosuchus. 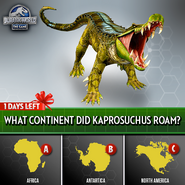 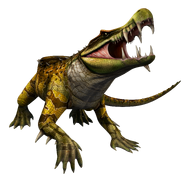 Retrieved from "https://jurassicpark.fandom.com/wiki/Kaprosuchus?oldid=209157"
Community content is available under CC-BY-SA unless otherwise noted.