Before joining the InGen Security Division, Hamada was a SWAT team leader.[1]

Hamada and his team were called to stop Jurassic World's remaining Indominus rex who had escaped her paddock, along with another team led by Austin. As the ACU soldiers were tracking the Indominus, they discovered that the genetically modified theropod had clawed out its tracking implant. Katashi looked up, and noticed the blood dripping off the trees, which turned out to be blood from the leaves above. The branches and leaves began shaking and snapping, and soon the dinosaur revealed itself to be camouflaging nearby, much to the shock and horror of the other troopers. Katashi tried to run away, but he was snatched up by the dinosaur. The others shocked the dinosaur with tazer rifles and stun rods, though inadvertently electrocuting Hamada as well. The dinosaur dropped Katashi, who attempted to crawl away, but the I. Rex stepped on him, crushing and killing him.[2] 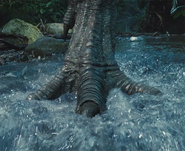 Hamada's death.
Add a photo to this gallery

Hamada does not appear in the story mode of the game, but he does appear in the Jurassic World hub. He is found just outside the Indominus rex Paddock caught in a snare he set for the titular hybrid. The player can free him by cutting him down using a character that uses a sharp object (such as Owen Grady or Alan Grant) to which the player receives a gold brick and Katashi Hamada becomes purchasable for 85,000 studs. He is shown to deeply fear his boss.

His death may be a reference to The Lost World: Jurassic Park, where the character Carter trips and falls into a puddle, before he is crushed and killed under the foot of the Tyrannosaur Doe.

According to an early draft of the script, Hamada was going to be similar to the novel version of Robert Muldoon. He was to be 52 years old and had killed with his bare hands before.[3]

'
Retrieved from "https://jurassicpark.fandom.com/wiki/Katashi_Hamada?oldid=223689"
Community content is available under CC-BY-SA unless otherwise noted.