Indigenous Indian for a Winged Deity

The Kelenken was a species of giant flightless predatory birds of the extinct family phorusrhacid, or "terror birds" that lived in the Middle Miocene, some 15 million years ago, in Argentina. It is closely related to the Cariamids. Kelenken was the top predator of its area and hunted other predators too. Kelenken, rather than flying, it ran fast, running up to 35 mph (56.3 kph). With a skull 71.6 cm (28.2 inches) long, it had the largest head of any known bird. It is the largest species of phorusrhacid.

The Kelenken appears as a Glacier Park animal in Jurassic Park: Builder as a gold creature.

Fully maxed Kelenken
Add a photo to this gallery

Kelenken appears as a tournament legendary savannah in Jurassic World: The Game.

Kelenken is a rare Cenozoic that appears in Jurassic World: Alive. 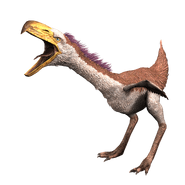 Retrieved from "https://jurassicpark.fandom.com/wiki/Kelenken?oldid=230708"
Community content is available under CC-BY-SA unless otherwise noted.