"You should've stayed on the island. Better odds."
—Ken Wheatley(src)

Ken Wheatley was an experienced mercenary and hunter who was in command of the rescue operation of the dinosaurs on Isla Nublar, and the secondary antagonist of Jurassic World: Fallen Kingdom.

A cruel and greedy man, Wheatley took up a rather macabre hobby of collecting teeth from dinosaurs captured by his team, a hobby which would eventually lead to his death at the teeth and claws of the Indoraptor.

Wheatley was already on Isla Nublar gathering up different species of dinosaurs and having them loaded onto his ship, the Arcadia. He claimed the big herbivores were easy to capture. Blue ("the blue one," as Wheatley called her) had so far eluded the mercenaries. When Owen Grady, Claire Dearing and the rest of the Dinosaur Protection Group arrived via plane, Wheatley greeted them at the airstrip. He was very boisterous and friendly, insisting on building a good working relationship with Claire, calling her by her first name, and calling Owen "the raptor wrangler."

Wasting no time, Wheatley loaded the new arrivals and his men into two Caiman armored cars and drove off towards the main area of the park, an Oshkosh truck with a cage for Blue following. Throughout the trek, Wheatley was friendly and sympathetic towards Owen and Claire. When the duo were silent and melancholy as the group rode towards the Innovation Center on Main Street, where the Battle of Main Street that ended the rampage of the Indominus rex happened, Wheatley asked "Bad memories...?"

Although friendly with Owen and Claire and even tolerant of the perpetually nervous Franklin Webb, Wheatley found himself often butting heads with Zia Rodriguez. His old-fashioned attitudes about women found him insisting she remain behind rather than accompany him and Owen to look for Blue, but she convinced him she needed to come just in case the Velociraptor required medical attention.

Wheatley showed his true colors when he not only didn't care about the death of one of his own men who Blue attacked, but tranquilized Owen and left him behind to die by the erupting volcano after securing the raptor. He also took Zia prisoner (at her own insistence) so she could treat Blue, as the mercenary she'd killed had shot her in reflex, though he threatened to kill her anyway if Blue died. Driving back to the mercenaries' camp on the coast, Wheatley phoned Eli Mills, his partner in crime, informing him of Blue's capture and demanding a bonus.

During this time, Wheatley and his team somehow even managed to capture the island's Tyrannosaurus rex, flying her by helicopter to the Arcadia. While rushing to load all of the captured dinosaurs aboard the Arcadia, Wheatley took the time to indulge in his macabre hobby; he collected teeth from animals he'd captured or killed, and dinosaurs were no different; except, of course, that the cloned dinosaurs had to be kept alive for Wheatley's pay. Using a pair of pliers, he extracted a tooth from a tranquilized Stegosaurus before having it loaded onto the ship. He and his men then fled the destruction of Isla Nublar, not realizing that Claire, Franklin and a recovered Owen had survived and obtained a Mercedes-Benz Unimog truck the mercenaries left behind on the pier in their haste to evacuate, which they drove onto the departing Arcadia while everyone was distracted watching the spectacle of the erupting Mount Sibo.

The Arcadia journeyed to the US. Wheatley continued hounding Mills about his bonus during the voyage, but Mills insisted he'd get it upon delivery of the raptor, whose life Zia saved with a blood transfusion from the Tyrannosaur. Arriving on the mainland United States, the convoy of captive dinosaurs drove towards Lockwood Manor. A guard at the front gate, who'd been on the island, recognized Claire and Owen driving the Unimog, alerting Wheatley, who took the pair prisoner.

Mills continued to blow off Wheatley regarding the bonus for Blue. After Claire and Owen escaped from captivity in the bowels of the mansion, releasing Stiggy to disrupt the auction of the Indoraptor, Wheatley, who was hanging around outside while awaiting his payment, beheld the startling and inexplicable sight of dozens of people fleeing out the rear loading entrances of the house, harassed the entire way by the escaped Stiggy.

Deciding he'd had enough, Wheatley went inside in an attempt to demand his bonus from Mills and found his way to the auction room, where he was amazed by the sight of the caged Indoraptor. He was confused by the animal, as he wasn't informed about Mills and Wu's plan to develop a hybrid and didn't recall capturing this particular dinosaur on the island earlier. He shot the hybrid twice with his tranquilizer rifle. He commented on its toughness, apparently not remembering how long it takes for a tranquilizer dart to affect a dinosaur, and prepared a third dart when suddenly the Indoraptor tottered on its feet, then collapsed to the floor of the cage. Cautiously, Wheatley unlocked and entered the cage, intending on collecting one of the (to him) mysterious dinosaur's teeth as a trophy in part of his payment for services rendered. He didn't notice the cage door swing shut behind him.

Commenting that the Indoraptor was "some kinda hotrod," he took out his pliers and began attempting to prise one of its teeth loose but to no avail. Suddenly, he sensed movement over his shoulder but when he looked there was nothing there, so he went back to prising the tooth loose. As he remarked, "Open wide", it did- the Indoraptor hadn't been tranquilized at all but merely feigning so as to lure the hunter into the cage. The creature's jaws opened wide and crunched down on Wheatley's right arm and lifting him into the air, screaming in pain, before biting clean through and severing the arm at the elbow, dropping Wheatley to the floor of the cage. As the hunter scrambled backwards, the beast swallowed his arm whole right in front of him and bent down to inspect its helpless prey. Wheatley, sobbing in pain and terror, could only piteously nudge the snout of the creature with his remaining hand before the Indoraptor bellowed right in his face, blowing his hat off, and then pounced on him. His gruesome demise was witnessed by auctioneer Gunnar Eversol, who had been hiding nearby.

Wheatley was a coldly pragmatic man. He fancied himself a hunter. A cruel man, he spoke soothingly to the dinosaurs whose teeth he stole for his collection that he plans to make a necklace out of, then callously taunted them about it which would later become his undoing and lead to his death.

Wheatley was capable of feigning friendliness and empathy for the dinosaurs and cooperated smoothly with Owen and Claire's group when they first arrived on the island, even if his interactions with them were often tinged with condescension.

Wheatley was dedicated to getting the job done no matter the cost. A would-be murderer, he gladly left Owen Grady behind to die by lava, and also ordered Claire Dearing and Franklin Webb sealed inside the park's power station when the mercenaries evacuated, and even threatened to kill Zia Rodriguez (who he called a "nasty woman") if she failed to save Blue.

Wheatley also exhibited great impatience and greed, constantly reminding his employer, Mills, that he was owed a bonus for obtaining Blue.

When the Indoraptor severed his arm, he cried out in agonizing pain and attempted to escape the cage. In this, he had shown fear. Having been reminded of his place in the food chain, he broke into tears before befalling a gruesome demise.

Wheatley's primary weapon was a customized tranquilizer rifle, along with a 4" Smith and Wesson model 500 as his sidearm. He also carried a set of pliars which he used to extract the teeth of captured dinosaurs such as a juvenile Stegosaurus. 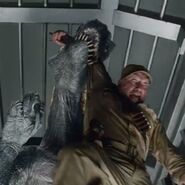 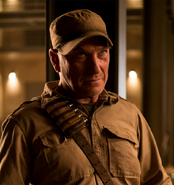