Kenji Kon is a main character in the Netflix series, Jurassic World: Camp Cretaceous. His character is voiced by Ryan Potter.

Kenji is a guest of Jurassic World, a constant one and considered VIP due to his wealthy father owning the condos built on the island, and as such knows the secret passageways underneath the island. At Camp Cretaceous, Kenji met five other campers there who were also participating in the camp. They engaged in several exciting activities at the camp, led by Roxie and Dave, the two camp counselors. Darius saw dinosaurs up close, drove a Gyrosphere, and made many incredible memories.

Kenji was often full of himself, trying to impress everyone around him. He creates trouble on his first day at camp and Darius has is forced to cover up for Kenji's mistakes. After disaster struck and the dinosaurs got out of containment, Kenji and the campers were left on their own to fight for their lives. They went on the run, rode in kayaks, and rode a monorail all trying to escape the dinosaurs. Kenji managed to make it to a ferry port alive. However, the ferry had already left, so he was left stranded on the island at the end of the first season of the show.

Kenji accompanies the group to Main Street in search of food and communication. He finds walkie talkies and frozen pizza, but the pizza is stolen by small dinosaurs. The next day, his walkie talkies are used to allow the group to monitor a T-Rex so that they can know when it's safe to enter its lair to activate a distress beacon. Together with Darius Bowman, Kenji invades the lair, breaks open the beacon, and activates the distress signal before fleeing to safety.

After deciding on their old camp as a base, Kenji is left behind to watch over Yasmina and to sift through the debris for anything useful. He decides to do nothing and rest, but Yasmina pushes herself to work which forces him to go after her. On finding her, she insists she rest and not push her limits, even taking her crutch to force her to relent, but she refuses and only ends up hurting herself even more. Kenji carries her back, and during a scuffle accidentally hurts her feelings by forcing her to face the reality of her limitations. Kenji comforts Yasmina as she cries, then carries her the rest of the way back to camp. He sets up a small pile of sticks there, which is promptly destroyed by several rampaging dinosaurs, so he and Yaz hide in a tree with the rest of the group, before returning to camp to build a treehouse.

Kenji runs out of water in the shower of their newly created fort, prompting Darius to get more, only to realize that the river is dried up. Kenji and Darius are then sent to investigate the water problem, eventually finding a dead waterfall. Kenji brushes off Darius' attempts to be "cool" and then begrudgingly scales the rock wall, eventually arriving at a dam. Darius tries to draw Stegosaurus over to destroy it, to no avail, so Kenji whistles as the dinosaurs and dodges when they get close, letting the dam be destroyed. They aren't killed by the dinosaurs however, due to the proximity of the watering hole, which Kenji at last admits is pretty "cool".

The campers are eventually rescued by Hap, Mitch, and Tiff after the campers saw their campfire. However, when they reach their saviors' camp, Kenji tries to downplay the luxury amenities there, bragging about his own rich family, although no one cares. He remains largely out of the main events, sulking and even staying with Brooklynn after she offended Darius. She drags him along to investigate Hap's yurt, with Kenji complaining about Mitch and Tiff's wealth on the way, but they both end up caught by Hap. Not perturbed in the slightest, Kenji promptly goes to sleep on Brooklynn's shoulder until she rouses him, and they both flee with Hap in pursuit. Before Hap can catch or reason with them however, Ben Pincus knocks him out, shocking Kenji.

Kenji, after reuniting with Ben, argues to trust Hap's story that there's a boat off the island. He goes along with Ben and Brooklynn to a storage unit with a motorcycle in it, which he rides behind Brooklynn. However, a Baryonyx trio chases them, forcing Hap to sacrifice himself to let Kenji and everyone else escape.

Everyone decides to go into the tunnels to reach Main Street in time to help Darius, over Kenji's terrified protestations. Within the tunnels themselves they discover a control center, and although they try to use it to help their friends in Main Street, Kenji is the only one who realizes that they have to restore the power first, and does so. This allows everyone else to, at length, master the controls and reactivate a hologram of a Tyrannosaurus Rex. This distracts the real Rex long enough for Sammy and Darius to escape.

Kenji is sent by Darius to pick him and Sammy up, but he refuses to go fast enough on the motorcycle, always turning to correct himself. Darius leaves, and eventually he's pushed to go faster and is able to drive properly. He drops Sammy off with Ben and then drives out with them, him alone on his motorcycle, to drive the dinosaurs away from the watering hole together. He then has to drive back when the Tyrannosaurus Rex sends the dinosaurs roaring back the other way, but he manages to drive to safety and rendezvous with everyone else.

"View from the Top"

Kenji and the other campers leave Jurassic World on a boat, but are then swept away and back on the island by a big wave. After Kenji mentions hand gliders in Lookout Point, the group heads to Lookout Point, where Kenji and Sammy get on a sky Gondola and start joking around. After getting off on the top, they look at the view, and end up spotting something important. When they are attacked by a dinosaur, they run back into the Gondola and Kenji prevents it from getting in by kicking in, resulting in himself and Sammy escaping. Fortunately, everyone escapes. After escaping, Kenji and Sammy tell the others they found Tiff and Mitch's boat. The six heads towards the boat.

In season 1, Kenji is a self-appointed VIP camper described as the "self-proclaimed alpha male of the group". He gives off the general impression of someone who is full of himself and has a big personality, bugging those around him. Behind his conceited and narcissistic veneer lies a truly lonely person eager to connect with his fellow campers. He shows hidden depths and an often eclipsed emotional and attenuative streak, being supportive of Darius and admitting his respect for him when he had led them all to safety, as well as defending Sammy Gutierrez from being criticized by Yasmina Fadoula and Brooklynn. Despite being wealthy, he isn't all that happy, as he sadly admits that the staff always lets him win bowling, as well as his father not spending much time with him. As he relaxed himself and opened himself up to fair criticism, he became more popular with others. He also seems to be an airhead, oblivious to danger and seems to consider himself indestructible.

In season 2, Kenji's arrogance, laziness and self entitlement are still present, particularly early on. However, as the season progresses, he becomes more caring and helpful to the group. While he did show a lack of appreciation to the park, he ends up having a change of heart after he and Darius find a Water hole. His bonding with the group continues, particularly with Darius.

In season 3, Kenji is more caring and helpful, even though can still be arrogant and lazy. While he refers to himself as the captain, he does not take the role seriously at times, which can frustrate Darius. However, when necessary, he steps up with his leadership and teamwork. He clearly prioritizes his friends over everything else by this point. However, a rift is caused between him and Darius when he silently accuses Darius of caring more about getting off the island than their friends (even though Kenji was willing to let other people die by giving Henry Wu his laptop which could create more hybrids), which is left unresolved due to the end of the third season.

While Kenji tends to brag about his rich dad, he occasionally expresses sadness over his dad not being there for him.

Having been to Jurassic World numerous times, Kenji knows the layout of the park like the back of his hand. 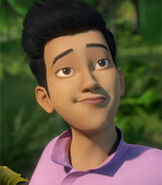 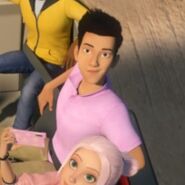 Kenji: "Clever guy." - when He, Darius encounter Blue again since Season 1 with Brooklynn, then Darius corrects him that Blue is a girl and Yaz's first time meets Blue.