Kenner Products was a toy company founded in 1947 by three brothers, Albert, Phillip, and Joseph L. Steiner, in Cincinnati, Ohio, United States, and was named after the street where the original corporate offices were located. It produced multiple toy lines of the Jurassic Park movies.

In 1985, General Mills spun off its Kenner and Parker toy divisions to form Kenner Parker Toys, Inc. Kenner Parker was acquired by Tonka in 1987. Under Tonka management, Kenner Products was reconstituted as a division.

Tonka (including Kenner) was purchased by the toy company Hasbro in mid-1991. Hasbro closed the Cincinnati offices of Kenner in 2000, and Kenner's product lines were merged into Hasbro's. 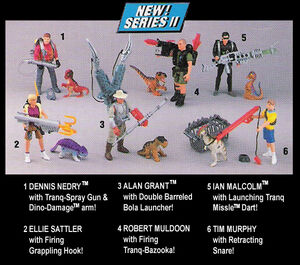 Kenner produced multiple toylines for the Jurassic Park and The Lost World movies.

Retrieved from "https://jurassicpark.fandom.com/wiki/Kenner?oldid=219131"
Community content is available under CC-BY-SA unless otherwise noted.