Kentrosaurus (meaning "pointed lizard") was a small member of the stegosaur family. It had 9 pairs of plates on its neck, shoulders, and back, and 5 pairs of long, sharp spikes above its hips and along its tail. Kentrosaurus also had a long spike on each of its hips (some paleontologists think that it also had these spikes on its shoulders).[1]

Two composite skeletons of Kentrosaurus were assembled from hundreds of bones quarried by German paleontologists between 1909 and 1912 in Tanzania. It was named by Edwin Hennig in 1915. The Tanzanian quarry geology indicated Kentrosaurus lived near a large river. It is therefore thought that it fed on lush, low growing vegetation along the riverbank. So many Kentrosaurus bones were found in this quarry that scientists believe that at least 70 must have perished at the site. This also suggests that Kentrosaurus lived in herds.[1]

Kentrosaurus was found in the same quarry as the famous Berlin Brachiosaurus. Unfortunately one of the two existing Kentrosaurus skeletons were destroyed by an Allied bombing raid on Berlin during World War II.[1]

A Kentrosaurus was cloned some time during or before 2016 on a secret island owned by Mantah Corp by Dr. Mae Turner, a paleo-neurobiologist that named the stegosaur "Pierce". Mae raised Pierce and kept him within a desert biodome, alongside a Smilodon. There she studied his brain reactions and found a way to somewhat communicate with him via replaying Pierce' own sounds back at him once she could understand what they meant on a basic level.

One day in the summer of 2016, Kash D. Langford ordered Pierce to be moved into their arctic biodome while being monitored by a BRAD robot in order to see how long the dinosaur can survive in such conditions. In the middle of the test, Mae and a group of children who had become stuck on the island stumbled upon the dying Kentrosaurus, and decided to help Mae move him back to the desert biodome he belongs in via moving him onto metal cots and pulling them with snow gliders. The plan works until the BRAD monitoring Pierce attacks the vehicles in order to stop their interference with the test. The confrontation ends with Yaz kicking the robot into a frozen lake they had been forced to drive over, allowing the group to move Pierce to the tunnels in between the domes where he could warm up.

With the immediate danger over, Mae and the kids moved Pierce back into the desert biodome, where Mae demonstrated her ability to communicate with the dinosaur on a basic level and allowed Darius Bowman to attempt this, although Pierce wasn't as appreciative towards them as he was to Mae's attempts.

The following day, Kash forced Pierce into another test, this time for him to fight a Tyrannosaurus rex named Big Eatie. While the pair was unwilling to fight initially, the drones forcing them closer together with electric shocks eventually forced them into it.

As the pair fought on, Pierce began to wear out against his larger opponent, breaking a tail spine within the Tyrannosaurus and eventually being taken out of the fight with a heavy injury. At this time, Darius Bowman had attempted to stop the fight, but was distracted by a phone he could use to contact the mainland before being caught by Kash, whom he convinced to spare the animals after pointing out how rare and expensive they are. Kash then sent drones out to separate the combatants and take them both down to the medical facility, although he believed Pierce likely wouldn't survive his injuries.

After Darius escaped from Kash, he snuck into the facility's main base and overheard Kash speaking with his boss about food supplies for the island's new Dilophosaurus running low, with the boss stating they will feed Pierce to the dinosaurs. With this knowledge, Darius hatched a plan to save Pierce, with Mae and Ben Pincus attempting to save him, only to be forced onto the feeding platform by an overwhelming amount of BRADs. As the feeding platform forced them into the biodome, they were quickly surrounded by Dilophosaurus, only for Brooklynn, Sammy, and Yaz to arrive with a snow glider to chase them off. As the group began celebrating, they were surrounded again, this time by BRAD-Xs as Kash and the boss revealed the entire plot was a trap to catch the group. 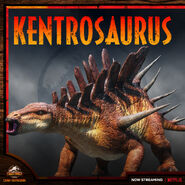 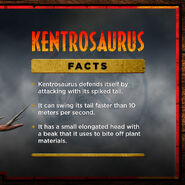 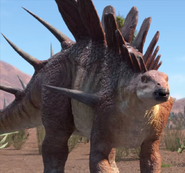