Koolasaurus is a hybrid of Sarcosuchus and Koolasuchus. It currently only appears in Jurassic World: The Game.

Koolasaurus first appeared in the game as an opponent in the battle arena with no way of creating it for the player's own personal park. This was until June 10, 2015, where it could be created by fusing a Level 40 Sarcosuchus and a Level 40 Koolasuchus together. 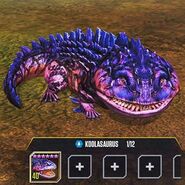