Koolasuchus is creatable in Jurassic World: The Game as a Rare amphibian.

It is unlocked by completing battle stage 28. More individuals can be purchased in the market for 610 DNA or found through card packs.

As of June 10, 2015, a Level 40 Koolasuchus can be fused with a Level 40 Sarcosuchus to create the hybrid Koolasaurus.

"Did you know the Koolasuchus gets its name from paleontologist Lesley Kool? It's also a play on the word 'cool'."

"The Koolasuchus lived in Australia during the Early Cretaceous Period. Back then the climate in that area was much cooler!"

"It's believed the Koolasuchus hibernated due to the cool climate, explaining why it outlived its northern ancestors."

"Similar in build to a crocodile, the Koolasuchus has a round head with tabular horns at the back of its skull!" 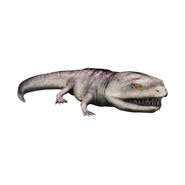 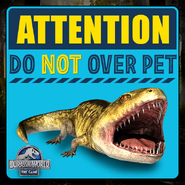 Add a photo to this gallery
Retrieved from "https://jurassicpark.fandom.com/wiki/Koolasuchus/JW:_TG?oldid=231812"
Community content is available under CC-BY-SA unless otherwise noted.