Kosmoceratops is a genus of herbivorous chasmosaurine ceratopsian dinosaur, which lived during the Late Cretaceous period (late Campanian) in the part of the island continent Laramidia that is now Utah, United States. Its fossils have been recovered from the Kaiparowits Formation in the Grand Staircase-Escalante National Monument, living with Deinosuchus, Nasutoceratops, Parasaurolophus, Troodon, and Teratophoneus.

Kosmoceratops is distinguished by an ornate skull, the most ornate of any known dinosaur. The horns above the eyes are long, thin, and pointed. They project laterally from the skull and curve downward. The orientation of these horns differs from most other ceratopsians, in which the horns are oriented either forward, or backward. There is a forehead-like hump on the skull roof in front of the eye sockets. The nasal horncore, the bony projection from which the nose horn grew, is flattened and blade-like. The frill of Kosmoceratops is the shortest relative to its width of any ceratopsian; it is about twice as wide as it is long. The parietal fenestrae, two holes in the frill, are also very small and are positioned toward the back. The size of the frill and its fenestrae differ considerably from other chasmosaurines, many of which are known for their elongate frills. Ten hook-like projections rim the frill. Eight of these hooks curve forward to overlie the frill, while the other two are positioned on either side of it, curving laterally rather than rostrally. Overall, there are fifteen horns or horn-like structures on the skull, the most of any ceratopsian.

Kosmoceratops appears as a skeleton in Lockwood Manor in Jurassic World: Fallen Kingdom.

Kosmoceratops on a poster for Jurassic World: Fallen Kingdom.

Kosmoceratops skull in the background

Two Kosmoceratops appear as skeletons on the banner for the "Lockwood Library" arena.

The Kosmoceratops is set to appear in the Legacy Collection line for Jurassic World: Dominion. This will be the first time it has ever physically appeared in a Jurassic Park toy set. Although there is yet to be any depiction of the creature alive in any of the media, its inclusion in the toyline is likely a reference to its appearance as a skeleton in Jurassic World: Fallen Kingdom. 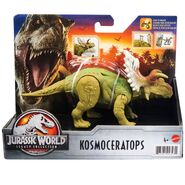 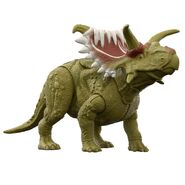 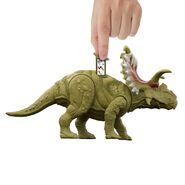 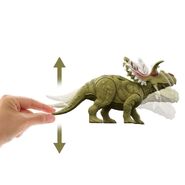 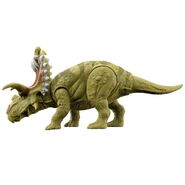