Kronosaurus was added to the Aquatic Park of Jurassic World: The Game on December 11, 2015 as a legendary reef creature.

Kronosaurus can be unlocked by completing its battle event. Additional individuals can be purchased in the market for 4,400 DNA or found through card packs.

"The Kronosaurus is named after the Greek titan, Kronos. It means 'lizard of Kronos'!"

"Did you know that the Kronosaurus is an incredibly fast swimmer? Its powerful pectoral girdle supports very strong strokes."

"At 33 feet long, and weighing 11 metric tons, the Kronosaurus is one of the largest plesiosaurs!"

"As an apex predator, the Kronosaurus eats in a similar fashion to the modern crocodile, clamping onto its prey with its jaws!" 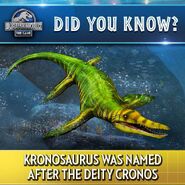 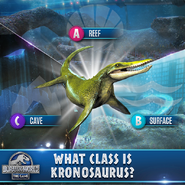 Add a photo to this gallery
Retrieved from "https://jurassicpark.fandom.com/wiki/Kronosaurus/JW:_TG?oldid=230118"
Community content is available under CC-BY-SA unless otherwise noted.