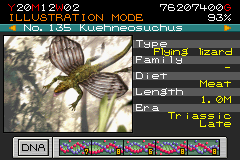 Kuehneosaurus is an extinct genus of Late Triassic reptile from Britain. Measuring 72 centimetres long (2.3 feet), it had "wings" formed from ribs which jutted out from its body by as much as 14.3 cm, connected by a membrane which allowed it to slow its descent when jumping from trees. It is a member of a family of gliding reptiles, the Kuehneosauridae, within the larger group Lepidosauromorpha, which also contains modern lizards and tuatara. It closely resembled the more well known gliding lizard genera Coelurosauravus and Icarosaurus

Kuehneosaurus didn't appear in any Jurassic Park novels or movies.

Kuehneosaurus did appear in Jurassic Park III: Park Builder. It is number 135 of the Carnivore Ones, erroneously labelled as "Kuehneosuchus".

Retrieved from "https://jurassicpark.fandom.com/wiki/Kuehneosaurus?oldid=211150"
Community content is available under CC-BY-SA unless otherwise noted.