Jurassic Park: Builder
Jurassic World: The Game
Leedsichthys was a giant fish that would have dwarfed every other animal in the Jurassic sea, but it was a gentle giant that lived on the tiny shrimps, jellyfish and small fish that make up plankton. It would have swum slowly through the upper waters of the ocean, taking mouthfuls of plankton-rich water and sieving them through the giant mesh-plates at the back of its mouth. Its feeding habits were similar to the modern blue whale, which also survives on nothing but plankton.

Leedsichthys appears in Jurassic Park: Builder as an adoptable animal for the Aquatic Park. It is one of the earliest animals available for the park. 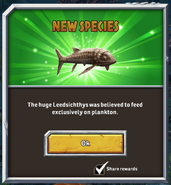 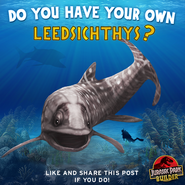 Leedsichthys appears as a legendary cave in the Aquatic park in Jurassic World: The Game. Due to having the Dunkleosteus animations, it is depicted as a piscivore rather than a filter-feeder like in real life. It is also depicted as much smaller than it was in life.