Limbo is a Baryonyx, and an antagonist (alongside his sisters) in the second season of the animated series Jurassic World: Camp Cretaceous. Limbo has two other companions, Chaos and Grim, although their relationship with each other remains unknown.

Limbo cares deeply for his companions. When he and Chaos located Grim's corpse after Tiffany killed her, the two tracked her down and killed her, ultimately avenging their sisters demise.

Limbo is a Baryonyx comprised of brown and green complexion.

Limbo appeared in Season 2 of Jurassic World: Camp Cretaceous. He first appeared in episode 2 "The Art of Chill". He and Chaos were first seen running through the woods looking for their packmate and sister, Grim. The two Baryonyxes' search would eventually bring them to the veterinary station. Whereas Chaos tried to free Grim from her cage, he arrived and chased the campers away and tries to eat Brooklynn and Darius but fail. When Chaos and Limbo were distracted, Darius freed Grim and she joined the rest of her family. He appears again chasing Brooklynn, Hap, and Kenji with Grim and Chaos. Limbo, Grim, and Chaos both ate Hap when he sacrificed himself to save the kids during a chase. When Tiffany kills Grim, both Limbo and Chaos became upset. The two then run and likely purse Mitch and Tiff, in order to avenge Grim's death. They later witnessed "Mitch" being devoured by "Rexy" the T Rex. Fortunately, Limbo and Chaos avenged Grim by jumping on Tiff's boat while she was escaping and killed her. 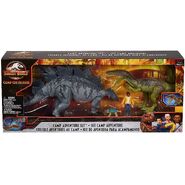 Limbo as part of the "Camp Adventure Set" 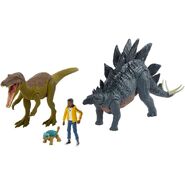 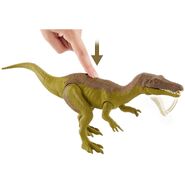 Limbo as seen in the Stegosaurus vs Baryonyx set.

Add a photo to this gallery
Retrieved from "https://jurassicpark.fandom.com/wiki/Limbo?oldid=265048"
Community content is available under CC-BY-SA unless otherwise noted.