Limnoscelis is a reptile-like amphibian from the Permian period of North America. It grew to about 1.5 meters (5 feet) in length and was likely a carnivore. It probably lived a lifestyle reminiscent of that of a crocodile.

Limnoscelis is usually the first amphibian that can be created in Jurassic World: The Game. It is portrayed as a large crocodile-like creature when in reality it resembled a medium sized lizard. 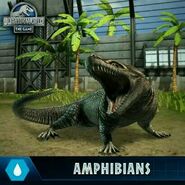 Retrieved from "https://jurassicpark.fandom.com/wiki/Limnoscelis?oldid=235804"
Community content is available under CC-BY-SA unless otherwise noted.