Liopleurodon is an extinct genus of large pliosaurid the lived in the Middle to Late Jurassic period in the seas that covered Europe. Initially believed to reach maximum lengths of 12 meters (40 feet), fossilized tooth marks believed to have come from Liopleurodon at the time suggested it could reach sizes of 25 meters (82 feet), longer than many modern day whales. Current estimates place Liopleurodon at a much smaller 7.6 meters (25 feet). It was an apex predator during the middle and late Jurassic. Studies of the skull have shown that it could probably scan the water with its nostrils to ascertain the source of certain smells.

Liopleurodon is a Legendary reef creature that can be created in Jurassic World: The Game. It was added as a part of the March 16th, 2016 update. 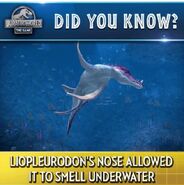 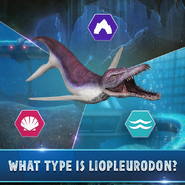 Liopleurodon appeared in Jurassic World Evolution 2. Here, it is depicted having crocodilian-like osteoderms on its back and claws on its flippers.

The Liopleurodon is set to appear in a toy line based on Jurassic World: Dominion, as part of the "Roar Strikers" assortment in June. This will be the first time it has ever physically appeared in any Jurassic Park toy set. 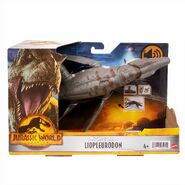 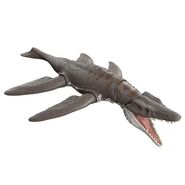