"Your Jurassic World adventure is sure to begin and end on Main Street!"
—JurassicWorld.com([[1]])

Main street is a street that goes from the Jurassic World Lagoon to the Innovation Center. The monorail takes visitors from the Ferry Landing directly to the Monorail Station Innovation Center. Therefore, for all new visitors of Jurassic World the Main street is the first part of the park they will see after arriving on the island. The Main Street, in turn, is a nexus to the rest of the park.

Most tourist facilities in the park are located on the Main Street. The Samsung Innovation Center, IMAX Theatre and Gentle Giants Petting Zoo are located at or near the Main street. Furthermore, the street has 37 shops, 12 sit-down restaurants, and 8 cafes.

During the Isla Nublar Incident of 2015, Main Street was the focal point of the evacuation but was attacked by many escaped pterosaurs, resulting in several gruesome injuries. Later, it was the site of a major battle between several Velociraptors, the park's T. rex, and the genetically-modified hybrid Indominus rex. In the chaos, two raptors were killed and much of Main Street was destroyed or badly damaged, including the Margaritaville restaurant and the Spinosaurus skeleton, before the hybrid was snatched by the Mosasaurus and dragged into the Lagoon to its death.

One year later in 2016, Main Street was used as a temporary campsite for a group of mercenaries sent to retrieve the I. rex skeleton from the Lagoon. The Tyrannosaurus appeared and attacked one of the mercenaries, Jack. She chased him down Main Street, past Pterosauria: The IMAX Experience, knocking abandoned vehicles out of the way, until he managed to grab a dangling rescue ladder from a helicopter flying above.

In 2018, the joint Dinosaur Protection Group/mercenary rescue team arriving to find Blue drove their Caiman armored cars and truck down Main Street near the Innovation Center on their way to the island's power plant. Ken Wheatley commented that it seemed as though Owen Grady and Claire Dearing had bad memories of the place. "Some of 'em were good," Owen admitted. The convoy had to stop due to a passing Brachiosaurus, which amazed Dr. Zia Rodriguez, before they drove on to the power plant.

Winston's Steakhouse
Add a photo to this gallery 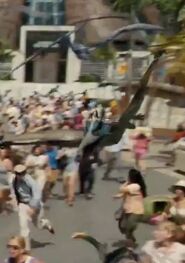 Pteranodon in the street

Zara and Pteranodon dies because of Mosasaurus surprise

T. rex and Velociraptor vs Indominus

Just before the fight

Indominus about to kill the Tyrannosaurus

I. rex roaring at T. rex

Blue watches T. rex limp away after the battle

T. rex about to be killed

Echo and Delta attacking I. rex

I. rex vs raptors and humans

I. rex staring at raptors

T. rex about to bite I. rex

T. rex smashing Indominus into the Margaritaville
Add a photo to this gallery

Jack flees down Main Street from the T. rex.

The T. rex roars at the escaping helicopter.

A Compsognathus among toy dinosaurs in a gift shop.

The group encounters a Brachiosaurus.

There was a scene where the Indominus rex is in the Main Street when it encounters a T. rex animatronic and she bites the animatronic's head off but it was cut when the script was being written, due to Steven Spielberg pointing out that people might interpret the scene as saying CGI is much better than animatronics.[1]

Retrieved from "https://jurassicpark.fandom.com/wiki/Main_Street?oldid=207056"
Community content is available under CC-BY-SA unless otherwise noted.