"I had to. They're alive, like me."
—Maisie, after saving the Nublar dinosaurs(src)

Responsible for the 2018 Dinosaur Outbreak

Maisie Lockwood is a young girl who lives with Owen Grady and Claire Dearing. She used to live in Lockwood Manor, owned by her late “grandfather” Benjamin Lockwood, an old business partner of John Hammond.

Maisie is Lockwood's granddaughter, and lives in his mansion under the supervision of maid Iris and Lockwood's ambitious right-hand man Eli Mills. A fan of dinosaurs, whose skeletons and imagery are very present in the mansion, she at times pretends to be one ambushing Iris.

One day, Maisie finds Mills talking to Gunnar Eversol about how the dinosaurs from Isla Nublar will be taken there, and warns her grandfather about how his plans of taking the creatures to a sanctuary won't be respected.

As Maisie enters the secret underground laboratory and sees footage of Owen Grady taming Blue and the other Velociraptors, she hears Mills talking to Henry Wu and attempts to hide. Once she approaches the Indoraptor cell, the hybrid tries to grab Maisie with his arm, scaring the girl and making Mills discover her. Mills proceeds to lock Maisie within her own room, while requesting Iris to not let her go.

By knocking the key out of the keyhole and pulling it under the door with a rug, Maisie managed to break out of her room, and after going to a balcony, climbed the outside of the house to Lockwood's room. To her sadness, her grandfather was dead. After hiding in a nearby dumbwaiter to avoid Mills, Maisie got all the way down to the lab, where she found Claire Dearing and Owen, who she recognized Owen as the man in the raptor video and Claire as the woman who talked with her grandfather about saving the dinosaurs.

After walking through the underground, they get to Eversol's auction from behind some grates, where they see the Indoraptor being brought in. In response to Claire asking about the beast, Maisie replies that they made it. She pointed Wu out to them. She and Claire witnessed Owen and Stiggy, the Stygimoloch disrupted and ruined the auction, preventing the Indoraptor from being sold.

She is with Owen and Claire when two of Mills's men arrived, pointing their guns at them and Mills, angered over them ruining his plans, tries to talk them into delivering the girl. Mills reveals that Maisie is actually a clone herself because Benjamin Lockwood wanted his daughter back. It only ends as the mercenaries are attacked and killed by the Indoraptor. They proceed to run from the Indoraptor in the great hall where Maisie used to play, with Maisie eventually hiding in her bed, as the hybrid's arms reached out to her and its jaws came closer. Owen enters the room and starts shooting the Indoraptor but the bullets are ineffective. However, Blue arrives at the room and confronts the Indoraptor while Owen and Maisie escape.

Both escape to the roof of the mansion, with the Indoraptor approaching them on all fours. Claire then distracted it from them and tries to get to fall off the glass roof as Blue finally kills the Indoraptor.

As the incident ends, Maisie releases all of the dinosaurs, which indirectly led to the T. rex of Isla Nublar and a Carnotaurus devouring Mills and destroying the DNA sample of the Indominus rex.

By the end of the film, she accompanies Owen and Claire in a station wagon.

Maisie has been confirmed to return in Jurassic World: Dominion.

Benjamin Lockwood is the "grandfather" of Maisie, only that he is actually the father of the original Maisie Lockwood, cloning her and making her think he is actually her grandfather. However, Eli Mills and Iris Carroll know about this. Benjamin wouldn't let Maisie see photos of his original daughter.

This section is a stub. You can help expand this section by adding some information.

This section is a stub. You can help expand this section by adding some information.

While sneaking around, investigating the secret lab below the Lockwood Manor, Maisie sees the video of Owen Grady researching the four raptors (Blue, Charlie, Delta and Echo). She saw his compassion through the footages. Later, she met up with Owen and Claire. While distressed at first, Maisie realized that it was Owen and tells that he's the Raptor man she saw from the footages and puts her trust in him. She develops an attachment to Owen as he and Claire protected her from the Indoraptor and Mills's mercenaries. Even when they learned the truth that she is a clone of Lockwood's deceased daughter, Owen, along with Claire, accepted Maisie as a person regardless of her origins.

Earlier, Maisie witnessed Claire Dearing speaking to her grandfather about saving the dinosaurs from the volcanic eruption in Isla Nublar. Days later, she met up with Claire and Owen. While distressed at first, Maisie realized that Claire was the woman she saw days ago and knew that she can be trusted. She developed the similar attachment to Claire as she and Owen protected her from Mills's mercenaries and the Indoraptor. Even when they learned that she is the clone of Lockwood's late daughter, Claire, along with Owen, accepted Maisie as a person regardless of her origins.

Owen, Claire, and Maisie looking at the Indoraptor.

Maisie, Owen, and Claire being scared by the Indoraptor.

The Indoraptor about to attack Maisie.

Maisie holding onto a pole.

Maisie, Owen and Claire after the Lockwood Manor incident.

Maisie warning her grandfather about Mills' different agenda for the dinosaurs.

Maisie appears in the second wave of the Jurassic World: Fallen Kingdom toy line, where she comes with a mini T. rex and its skull that can be assembled. 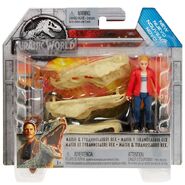 Add a photo to this gallery
Retrieved from "https://jurassicpark.fandom.com/wiki/Maisie_Lockwood?oldid=238777"
Community content is available under CC-BY-SA unless otherwise noted.