Jurassic World (Hybrid use only)[1]

Majungasaurus (previously Majungatholus), was a medium sized abelisaur theropod from Madagascar. It was related to the better known and famous Carnotaurus. It was one of the few dinosaurs to show evidence of cannibalism. It has a pair of crests and a small spike on its head and tiny arms that were smaller than Tyrannosaurus rex.

Genetic material of Majungasasaurus was in possession of InGen by 2014 and was used in the genetic hybrid Indominus rex in Jurassic World. This explains the Indominus' prominent scale orientation.[1]

Majungasaurus is no. 005 of the Carnivore Twos that can be created in the game Jurassic Park III: Park Builder.

Majungasasaurus is one of the creatable dinosaurs in Jurassic World: The Game. Unlike the real Majungasaurus, the game depicts it with 2 large digits instead of 4 small digits. 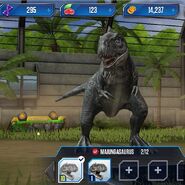 Majungasaurus in the opening 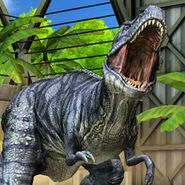 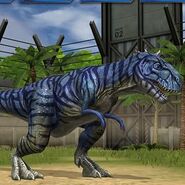 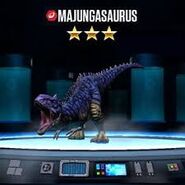 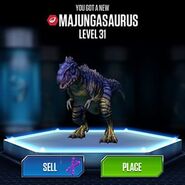 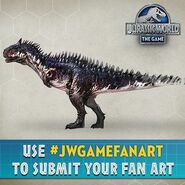 Concept of a max level Majungasaurus.

Majungasaurus is set to appear in Jurassic World Evolution 2.

A Majungasaurus figure was featured in a toy-line for Jurassic World: Fallen Kingdom. This is the first time it has ever appeared in a Jurassic Park toy set. Its color scheme is mostly dark green with light green blotches on the head, neck, and body.