The Dinosaurs of Jurassic Park: The Lost World
Mamenchisaurus is one of the most unique long-necked dinosaurs for a very good reason - it has a really long neck. In fact, it had the longest neck of any creature that ever lived. Stretching 18 metres (60 feet), the neck on Mamenchisaurus was longer than a school bus. The rest of it was just like other members of its family; a long tail, with stout legs.[1]

Mamenchisaurus had 19 neck vertebrae, more than any other dinosaur. The vertebrae had long struts running between them that would have limited the ability of Mamenchisaurus to turn its neck too sharply, but it could still reach well up into the trees to feed. This plant-eater had spatula-shaped teeth that seem to have been well designed to chew coarse plant material. This is one feature that makes it different from the members of the Diplodocidae family, which had peg shaped teeth, to which it has been thought to belong. It is now being thought of as possibly part of a group of sauropods unique to Asia. Most of the big Asian sauropods, such as Omeisaurus, had spatulate teeth. In fact, the Asian sauropods, including Mamenchisaurus, seem to share more characteristics with Brachiosaurus than with Diplodocus. For evidence of this, one needs to look no further than the nose - Mamenchisaurus and other Asian sauropods are very close in evolutionary terms to that of Brachiosaurus. It is also thought that another aspect that these creatures had in common was that they were finding their food high off the ground. Diplodocus and Apatosaurus on the other hand were likely feeding on low growing plants.[1]

Four Mamenchisaurus were created by InGen scientists[2] in their compound[3] on Isla Sorna where they were taken care of by the workers there. These clones had erect necks, and lacked the tail club and hump the originals had.[2]

It was not planned for InGen's Jurassic Park on Isla Nublar.[4]

After Hurricane Clarissa struck the island, Mamenchisaurus became wild like most of the dinosaurs on Isla Sorna, having either been freed by the workers before they evacuated or they escaped on their own. To counter the Lysine contingency, Mamenchisaurs ate lysine rich plants.

While the InGen Hunters captured the island's wild dinosaurs, two Mamenchisaurs walked out of the forest into the open field. Peter Ludlow was amazed by the enormous size of the animals. One of the Hunters drove between a Mamenchisaurus legs with a motorbike.[2]

It is unknown if Peter Ludlow captured a Mamenchisaurus for his Jurassic Park in San Diego. The chances are unlikely, however, due to their large size.

It was recently known that Mamenchisaurus were subject to cruelty at some point in the past, although it is unknown if there are any surviving populations left.

Mamenchisaurus is featured in the arcade game The Lost World: Jurassic Park arcade game. In appears in Stage 2 in the Site B Scrub. There is a herd of dinosaurs and you need to drive through without being trampled. First, it will lift its foot and the player will need to shoot certain spots so it doesn't crush you. If the player does it again, it will do the same with its tail, twice. That Mamenchisaurus walks away and there is another one defecating. In order to pass, the player needs to shoot its dung. If he/she doesn't, it'll fling its feces directly at the player. The screen will be covered in fecal matter, the player will lose a life and the screen will say 'Failed'. The car swerves into a pit of mud or dung and the player will need to fight off raptors.

Memenchisaurus appears in both the background and as a boss in the Game Gear adaption of The Lost World: Jurassic Park.

Mamenchisaurus is nr. 058 of the Herbivore Threes that can be created in Jurassic Park III: Park Builder.

Mamenchisaurus from Jurassic Park III: Park Builder.
Add a photo to this gallery

A plush toy of Mamenchisaurus was made for the film The Lost World: Jurassic Park. 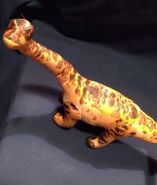 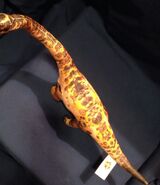 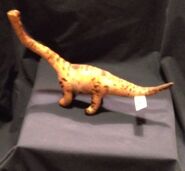 In the script for The Lost World: Jurassic Park, there was to be a scene after Dr. Sarah Harding escapes the angered Stegosaurus where her and her group saw two Mamenchisaurus mating. Mamenchisaurs were also absent from the Game Trail in the script, with Apatosaurus taking its place.

Mark "Crash" McCreery sketched the Mamenchisaurus in The Lost World and Jim Charmatz colored the sketch.[5] The CGI model for Mamenchisaurus was not a new model, but instead a retrofitted model of the first film's Brachiosaurus, the addition being a more stretched out neck, a longer head, and a more whip-like tail. Colin Wilson noted that due to Brachiosaurus having a head and body similar in shape to Mamenchisaurus Industrial Light and Magic was able to modify the Brach's model.[6] The modifications were done by Ken Bryan.

In the The Dinosaurs of Jurassic Park: The Lost World the first full-scale Mamenchisaurus was shown.

Retrieved from "https://jurassicpark.fandom.com/wiki/Mamenchisaurus?oldid=263215"
Community content is available under CC-BY-SA unless otherwise noted.