The Mastodon which means "breast teeth" in Greek, is an extinct mammal that lived in the Pleistocene 10,000 to 11,000 years ago. It is closely related to modern elephants. Compared to mammoths, mastodons had shorter legs, a longer body and were more heavily muscled, a build similar to that of the current Asian elephants. The average body size of the species M. americanum was around 2.3 m (7 ft 7 in) in height at the shoulders, corresponding to a large female or a small male, but large males could grow up to 2.8 m (9 ft 2 in) in height and weigh as much as 4.5 tonnes (5 short tons). However, the 35-year-old specimen AMNH 9950 could grow 2.89 metres (9.5 ft) tall and weighed 7.8 tonnes (7.7 long tons; 8.6 short tons), and another male grew 3.25 metres (10.7 ft) tall and weighed 11 tonnes (11 long tons; 12 short tons). Another species, M. borsoni, is known from 30–40-year-old males that were 3.9–4.1 metres (12.8–13.5 ft) tall and 14–16 tonnes (14–16 long tons; 15–18 short tons) in weight. Like modern elephants, the females were smaller than the males. They had a low and long skull with long curved tusks, with those of the males being more massive and more strongly curved. Mastodons had cusp-shaped teeth, very different from mammoth and elephant teeth (which have a series of enamel plates), well-suited for chewing leaves and branches of trees and shrubs. 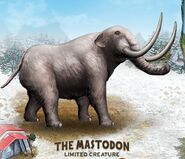 The Mastodon appears as a tournament Cenozoic animal in Jurassic World: The Game.

Retrieved from "https://jurassicpark.fandom.com/wiki/Mastodon?oldid=222292"
Community content is available under CC-BY-SA unless otherwise noted.