Jurassic World: The Game
Jurassic World: Alive
Megacerops, previously known as Brontotherium and Brontops, is an extinct genus of the prehistoric odd-toed ungulate (hoofed mammal) family Brontotheriidae (or Brontotheres), an extinct group of rhinoceros-like browsers related to horses. It was endemic to North America during the Late Eocene epoch (38–33.9 mya), existing for approximately 4.1 million years.

Megacerops was identifical by the two blunt horns on the tip of its snout. Woulds inflicted on the ribs suggests that males used them to fight off rivals, although they may also have been used to defend themselves from predators.

Megacerops was added as a Solid Gold pack Cenozoic savannah on February 9th, 2018 in Jurassic World: The Game under its' junior synonym Brontotherium. However, the correct name for the genus is mentioned in one of the game's evolution facts.

Megacerops is a common Cenozoic creature in Jurassic World: Alive under its' junior synonym Brontotherium. 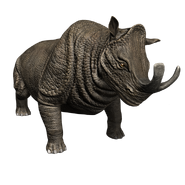 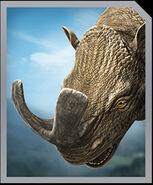