Megalosaurus was the first dinosaur ever to be discovered. Sir Richard Owen described it as a large monitor lizard due to its teeth that look so similar. The face of Megalosaurus remains a mystery. Dr. Thomas R. Holtz says it might be an ancestor of the spinosaurids; many scientists agreed with him. Others say it's a carnosaur. The most complete skeleton which has 22 percent of Megalosaurus had more details of a spinosaurid than a carnosaur.

Megalosaurus is mentioned in one of the facts Mr. DNA provides for the player.

Megalosaurus was added to the game on November 27th, 2015, but is a limited tournament dinosaur. It is a legendary carnivore. It should be noted that the game has the Megalosaurus have only 2 fingers due to it sharing the model with Tyrannosaurus rex, Giganotosaurus, Majungasaurus, and many other large carnivores in the game, when in reality, they had 3 fingers. 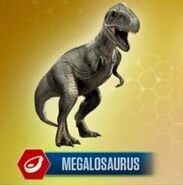 Megalosaurus in Jurassic World: The Game 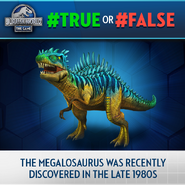 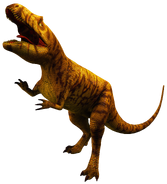 Megalosaurus is mentioned in the database entry for Metriacanthosaurus.

Megalosaurus is a dinosaur in the deluxe edition of Jurassic World Evolution 2.