Megaraptor was a medium sized theropod from the Late Cretaceous Period. Its distinguishing feature was a large sickle-shaped claw on each hand, which is very similar to the hand claws of Spinosaurs, and which resemble the claws on the feet of dromaeosaurs. Because of this resemblance Megaraptor was originally described as a dromeosaur until a fossil hand found in 2002 proved otherwise, which proved that Megaraptor, in fact, came from a different group of dinosaurs.

The Megaraptor was featured in Warpath: Jurassic Park. As the game was made before the discovery of the aforementioned hand bone, it is portrayed as a giant dromaeosaur; in this case, an enlarged/oversized Velociraptor. It was most likely chosen because the raptors from the movies were much too small compared to the other dinosaurs in the game. In the game's instruction manual, it is codenamed M-Raptor, while in the game it is codenamed as Raptor. In the main menu, and the save settings/memory card menu, the Megaraptor took the Velociraptor's place (on the field with tall grass). It has three colors: tiger skin, brown, and black. 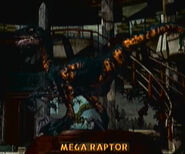 A Megaraptor is one of the figures in the Roar Attack line. 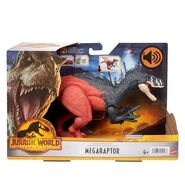 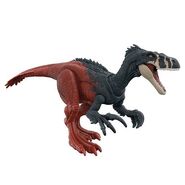