Megatherium was added to the Biosphere for Jurassic World: The Game on April 19, 2017 as a legendary cavern creature. It was promoted to a Tournament Legendary in Update 38.

It is unlocked in the market by finishing in the top 1% of a Megatherium tournament event. Additional individuals can be purchased in the market for 6,900 DNA or found through card packs or in custom trades in the Trade Harbor.

"The Megatherium is also called the Giant Ground Sloth. It is one of the biggest mammals to ever live!"

"As one of the slowest and largest mammals in its ecosystem, the Megatherium has no reason to run from a predator!

"Still around during the Holocene, Megatherium probably interacted with humans!

"The average Megatherium, standing on its hind legs, can reach 20 feet in height! That's the same as the Easter Island statues!" 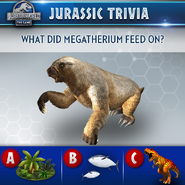 Add a photo to this gallery
Retrieved from "https://jurassicpark.fandom.com/wiki/Megatherium/JW:_TG?oldid=232035"
Community content is available under CC-BY-SA unless otherwise noted.