Jurassic Park: Builder
Jurassic World: The Game
Megistotherium is an extinct creodont that lived in the Early Miocene epoch some 23 million years ago which is closely related to Hyaenodon. Since the Megistotherium was big and heavy, many scientists think it was slow and clumsy.[1] There was only one other carnivore that could rival the Megistotherium in size, the Andrewsarchus.[2]

Megistotherium appears in Jurassic Park: Builder. It is usually the fourth Glacier animal to be unlocked. 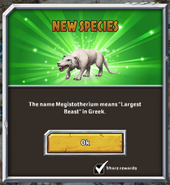 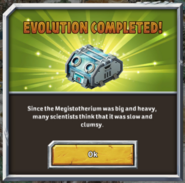 Challenge Accepted
Add a photo to this gallery

Megistotherium can be created as a Rare Cavern in Jurassic World: The Game.

Retrieved from "https://jurassicpark.fandom.com/wiki/Megistotherium?oldid=262980"
Community content is available under CC-BY-SA unless otherwise noted.