Mercedes Benz M-Class are the vehicles the Gatherers used during their expedition to Isla Sorna along with two modified trailers. Their purpose was to be able to drive and navigate throughout the island for the gatherers' purpose of transporting equipment such as cameras and items for studying dinosaurs. Both of the vehicles were 1997 Mercedes ML 320s.

Only two variants of the Mercedes-Benz M-Class's were in operation on Isla Sorna Incident, by the InGen gatherers.

Plus one that was left behind, because of the lack of driver.

During a deleted scene they leave the vehicles where the trailer scene will occur and go to find Sarah because they don't want to risk damaging the vehicles. The evening when Ian returned from the high hide, because Nick didn't answer the phone as he was fixing a baby T. rex's leg. After he returned the Rex parents sent one of the Mercedes over the cliff. The final time we see the vehicles is when the Rex sent the trailer over the cliff with Ian, Nick and Sarah hanging by a rope. During an attempt to pull the trailers up the Rex parents came back and attacked Eddie's vehicle and kill him in the process. It rolled over the cliff but saved the lives of his friends at the cost of his life.

As mentioned the Santana as driven by Eddie was damaged by two T-Rex's and eventually went over the side of the cliff along with the Fleetwood RV Mobile Lab.

In the novel The Lost World, Malcolm's team has one modified-Ford Explorer that is solar-powered by panels on its' roof and hood. It is equipped with three Lindstradt Air Guns, and has a computer monitor linked with the trailers systems. It was manufactured by Thorne Field Systems. 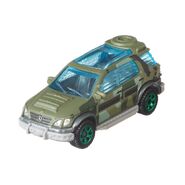 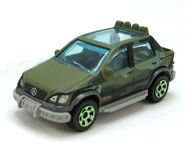 2019 Matchbox toy (Santana).
Add a photo to this gallery
Retrieved from "https://jurassicpark.fandom.com/wiki/Mercedes-Benz_M-Class?oldid=220076"
Community content is available under CC-BY-SA unless otherwise noted.