View source
watch 02:24
Wiki Targeted (Entertainment)
Do you like this video?
Play Sound

The Mercedes-Benz Unimog is a German truck renowned for its toughness and offroad capabilities. On Isla Sorna, they were used by the InGen Hunters. They came in a standard U 1300 version and a U 2450 crew cab version. The standard Unimogs featured scissor lifted observation platforms for the hunters. A crew cab Unimog was the first hunter vehicle seen, suspended from an InGen helicopter as it arrived on the island.

Jurassic World used U 4000 models as Mobile Veterinarian Units. Claire Dearing drove one to get herself and her nephews, Zach Mitchell and Gray Mitchell, to safety.

Ken Wheatley's team used several Unimogs. During the eruption of Mount Sibo, Claire, Owen and Franklin Webb stole a U 5020 that the mercenaries had left behind on the dock and used it to drive aboard the Arcadia before the ship left.

U 2450 Unimog on display at Universal Studios.

Ken Wheatley's mercenaries abandon the U 5020 Unimog on the dock.

The mercenaries surrounded Owen and Claire in the Unimog. 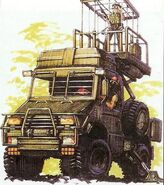