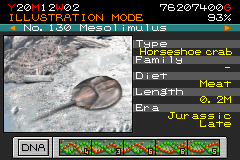 Mesolimulus is an extinct genus of arthropod. The best known examples are found in Solnhofen limestone near Solnhofen, Bavaria, Germany. Originally assigned to the living genus Limulus, they are related to and look virtually identical to the modern horseshoe crab.