Metriacanthosaurus is an unlockable dinosaur in Jurassic World: Evolution. Their couloring is based on the jurassic world website's design.

Metriacanthosaurus fossils are unlocked once the player ___.

Metriacanthosaurus is a medium sized therapod and eat large amounts of meat from any source.

They are normally solitary, but can exist in small social groups and alongside a modest number of dinosaurs from other species.

Their territories should comprise of good sized grassland with some forest cover.

Metriacanthosaurus was a large theropod that once hunted across Europe. Its anme means 'moderately spined lizard' in reference to the spines on its vertebrae.

Comparatively little is known about this dinosaur compared to its contemporaries like Allosaurus.

Metriacanthosaurus was originally classified as a species of Megalosaurus from remains found in Oxfort Clay in the UK. In 1964 it was identified as a separate genus.

Oxfort Clay contains a rich variety of remains including marine animals, indicating that Metriacanthosaurus hunted in coastal regions and near waterways. 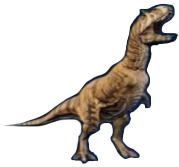 Add a photo to this gallery
Retrieved from "https://jurassicpark.fandom.com/wiki/Metriacanthosaurus/JW:_E?oldid=221359"
Community content is available under CC-BY-SA unless otherwise noted.