Metrialong can be created in Jurassic World: The Game as a Super Rare Hybrid carnivore.

As of June 29th, 2016 it can be created for the park by fusing a level 40 Metriorhynchus and level 40 Guanlong.

"Did you know that Metrialong means 'moderate dragon'? It references its crocodilian snout, which is narrower and longer than average."

"Weighing between 300 and 350 pounds, the Metrialong is stockier than its agile Guanlong progenitor!"

"Like the Metriorhynchus, the Metrialong's diet includes fish, amphibians, and other marine reptiles."

"The Metrialong has a distinct fin-like tail, an under-developed sail, and long arms suited for swimming and hunting." 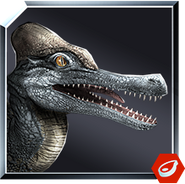 Add a photo to this gallery
Retrieved from "https://jurassicpark.fandom.com/wiki/Metrialong/JW:_TG?oldid=229710"
Community content is available under CC-BY-SA unless otherwise noted.