Metriorhynchus can be created in Jurassic World: The Game as a Super Rare amphibian.

It is unlocked by completing the Earth Shattering event. More individuals can be purchased in the market for 1,400 or found through card packs.

As of June 29, 2016 a level 40 Metriorhynchus can be fused with a level 40 Guanlong to create the hybrid Metrialong.

"Smaller and less well-armoured than other ocean predators, the Metriorhynchus relies on its agility in the water to avoid becoming prey itself!"

"The Metriorhynchus lay its eggs like turtles, coming to shore to bury their clutch in the sand!"

"This 500 pound, 10 foot long carnivore spends much of its life in salt water, hunting fish and other aquatic creatures."

"Similar in size to a crocodile, the Metriorhynchus is designed for swimming, with a smooth body and a finned tail!" 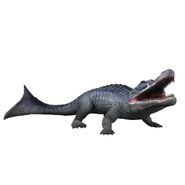 Add a photo to this gallery
Retrieved from "https://jurassicpark.fandom.com/wiki/Metriorhynchus/JW:_TG?oldid=236226"
Community content is available under CC-BY-SA unless otherwise noted.