Microceratus is an extinct genus of small ceratopsian dinosaur that lived in the Cretaceous period in Asia. It would have used its sharp beak to bite off the leaves or needles. In the first Jurassic Park novel, they spend most of their time in the trees.

It became known as Microceratops when it was first discovered in 1953, but that name was already occupied by a wasp with the same name. The replacement name Microceratus was created by Mateus in 2008 for the type specimen.

22 Microceratus were created on Sorna for the original Jurassic Park on Isla Nublar,[1] but were released from their enclosure during Hurricane Clarrisa. It is unknown if there were any surviving populations by 1997 incident.

Microceratus was successfully recreated by InGen for Masrani Global Corporation's new dinosaur park Jurassic World. Their skin color on the website came in olive, dark red, turquoise, or all of the above. Each individual had at least one or all of these colors arranged in a unique pattern, though its true appearance in the park is unknown. They seem to be able to swap between being a quadruped and a biped on the painting. They grew a foot longer than the original dinosaur and weighed 10 more pounds. They had low intelligence and would mistake litter of park visitors for food.[2] It lives in the Cretaceous Cruise and is possibly the second smallest dinosaur in Jurassic World, second only to Compsognathus.

During the Jurassic World Incident, Owen Grady entered the Jurassic Traders Outpost with Mitchell's, and the Indominus then tried to snatch them out of the shop. During the scene a T-shirt can be seen which reads "Creatures of Jurassic" lists Microceratus as one of the park attractions.

While no Microceratus appeared in the film, it has been revealed that there were surviving Microceratus populations on Isla Nublar. The surrounding foothills of Mount Sibo were the favoured territory of Microceratus along other dinosaurs, which was at the top of the critical exposure list.

None were seen being taken to Lockwood Manor, so unless this was done offscreen, it can be assumed that the species has fallen back into extinction.[3]

By 2018 it was known that they were subject to cruelty at some point in the past.[4]

At least three Microceratus were seen in the Amber Clave Night Market in Malta. At BioSyn HQ, Dr. Wu shows Maisie a video of her mother as a child admiring a Microceratus back when she lived on Isla Sorna. 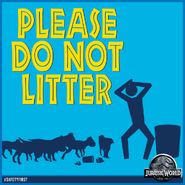 A sign advising the visitors of Jurassic World not to litter for the sake of Microceratus. 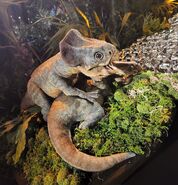 A group of Microceratus animatronics at the Los Angeles premiere of Jurassic World: Dominion

A group of Microceratus animatronics at the Los Angeles premiere of Jurassic World: Dominion

In the Jurassic World storyboard, Microceratus was supposed to live in the Gentle Giants Petting Zoo. They were also shown to be a bit aggressive, as show in the storyboard when they are seen jumping on a man's face.[5]

The icon for Microceratus seen on the Holoscape and the Jurassic World website comes from a size diagram of Microceratus from the website DinoPit.

Microceratops from the Jurassic Park Institute. A synonym for Microceratus.