Mixosaurus is an extinct genus of Middle Triassic ichthyosaur. It was the most common genus of Triassic ichtyosaurs: it's fossils have been found all over the world, including China, Timor, Indonesia, Italy, Spitsbergen, Svalbard, Canada, as well as Alaska and Nevada in the US. It was named in 1887 by George H. Baur. The name means "Mixed Lizard", and was chosen because it appears to have been a transitional form between the eel-shaped Ichthyosaurs such as Cymbospondylus and the later dolphin-shaped ichthyosaurs, such as Ichthyosaurus. Baur named Mixosaurus as a new genus because its forefin was sufficiently different from that of Ichthyosaurus. 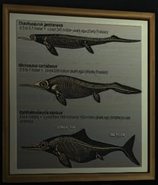 The icthyosaur chart seen in the facility, Mixosaurus is the ichthyosaur seen on the middle.