The Mobile Command Center is one of the largest vehicles produced by Kenner and was first released in the The Lost World Series 1 toy line and after that in the Chaos Effect toy line. It is based on the Fleetwood RV Mobile Lab from The Lost World: Jurassic Park. The trailer's features electronic sounds and lights, dino-damage, telescoping crane, fold out observation lab, perimeter fence and a Kelly Malcolm figure. It has a lot of characteristics from the real one in the movie from the toy line.

The Chaos Effect version is repainted light, neon green with black and blue camo markings. It has about the same accesories, but some differ. 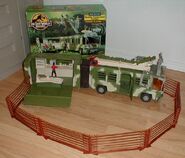 Add a photo to this gallery
Retrieved from "https://jurassicpark.fandom.com/wiki/Mobile_Command_Center?oldid=95307"
Community content is available under CC-BY-SA unless otherwise noted.