Monolophosaurus was one of the dinosaurs cloned for Jurassic World with grey, yellow and green variants. These Monolophosaurus managed to survive after the fall of the park, and at some point were encountered by park survivor Darius Bowman, where he learned of their preference for small prey and solitary nature.

Darius' group encountered a Monolophosaurus on their way to Kenji's dad's penthouse, but Darius reassures the group it is of no threat and moves on. As the kids search the penthouse, a mob of Monolophosaurus follow them to the building and break in via an air vent. As the dinosaurs search the building, two of them find Ben Pincus, Sammy Gutierrez, and Yasmina Fadoula in one of the building's hallways, forcing them to climb into an air vent to escape, but the dinosaurs manage to follow them inside. The group manages to briefly lose the dinosaurs and get into the penthouse's garage, but the Monolophosaurus eventually catch up, forcing the group to hide within the limos. Having just taken the gas out of all but one of the limos, the kids are forced to sneak through the limos and past the dinosaurs until they reach the final limo, and use it to drive off and escape the mob.

Meanwhile, another Monolophosaurus breaks into the penthouse suite, where Darius, Brooklynn, and Kenji Kon were waiting, and forces them to retreat down the elevator shaft. As they climb down, two more Monolophosaurus ambush them from the air vents. One of the dinosaurs causes Brooklynn to fall to the bottom of the shaft before falling itself and falling unconscious until Darius falls on top of it. As it prepares to attack them, Kenji saves them by a sculpture he was caring onto the dinosaur's head, knocking it unconscious again. Exiting the penthouse, the group are attacked by more Monolophosaurus until Ben, Yaz, and Sammy find them with their commandeered limo, and the group's Ankylosaurus Bumpy slams into the predators, leaving them disoriented. As the kids escape, Darius voices his confusion over the more social behavior shown by the Monolophosaurus.

A Shock to the System

After being informed about the existence of a wild hybrid, the Scorpius rex, Darius theorizes the hybrid's existence is what's causing the behavioral changes in Monolophosaurus and other dinosaurs.

Two Monolophosaurus enter Dr. Henry Wu's private lab and investigate the building until Brooklynn lures them in by banging an umbrella against a pipe. The dinosaurs attack her captors, mercenaries Hawkes and Dawson as well as Henry Wu himself until Brooklynn uses the opportunity to attempt an escape, which draws the attention of the Monolophosaurus towards her. Pursued by the dinosaurs, she quickly finds the building's exit and shuts it on the approaching predators. 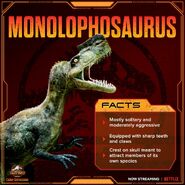 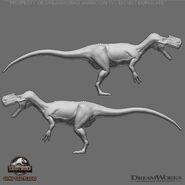 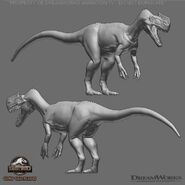 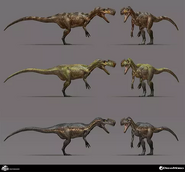 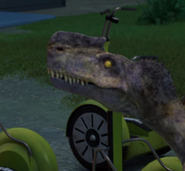 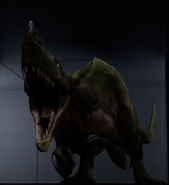