Mononykus was a theropod dinosaur from late Cretaceous Mongolia (Nemegt Formation, about 70 million years ago) with long, skinny legs. It moved about on two legs, was very nimble, and could run at high speeds, something that would have been useful in the open desert plains where it lived. It had a small skull, and its teeth were small and pointed, suggesting that it ate insects and small animals, such as lizards and mammals. Its large eyes might have allowed Mononykus to hunt by night, when it was cooler and there would have been fewer predators about. Like all alvarezsaurids, it had very strange, stubby forearms with one large, approximately 7.5-centimetre (3.0 in) long claw (hence its name). The other two claws had disappeared. The purpose of these highly specialized arms is still a mystery, but some scientists have suggested they were used to break open termite mounds (like modern anteaters), and therefore it is possible that they fed primarily on insects. Mononykus is usually reconstructed with a covering of feathers. Indeed, in the fossil of its relative Shuvuuia feather traces were discovered, proving that Alvarezsauridae were among the theropod lineages with feathery or downy integument.

Five Mononykus appear as statues in the Lockwood Manor in Jurassic World: Fallen Kingdom. They are green, with red legs and throat pouches. They possess black and white quills on their arms and the end of their tail.[1] 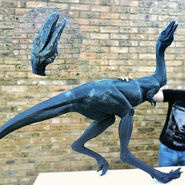 Mononykus appeared in Jurassic Park III: Park Builder (albeit with a misspelled name, "Mononychus"). The picture seems to show an huge claw on its' small claw, when it really wasn't as large as the image showed.

A 2019 line from Mattel will feature Mononykus. This will be the first time it has ever physically appeared in any Jurassic Park toy set. 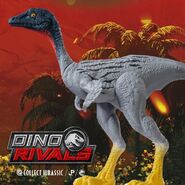 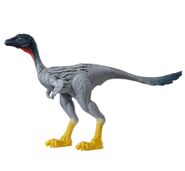 Retrieved from "https://jurassicpark.fandom.com/wiki/Mononykus?oldid=214283"
Community content is available under CC-BY-SA unless otherwise noted.