Mortem rex is a genetically enhanced black Tyrannosaurus rex with large purple and red plates jutting from its back. Its appears exclusively in Jurassic World: Alive.

see Mortem rex/JW: A Mortem rex appears in the game as a raid boss and the very first Apex creature. 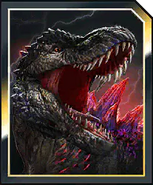 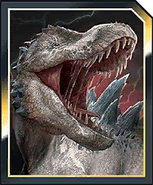