"The Mosasaurus was thought to have hunted near the surface of the water, where it preyed on anything it could sink its teeth into, including turtles, large fish, even smaller mosasaurs."
—Sarah(src)

Mosasaurus is a genus of large aquatic carnivorous lizard from the Late Cretaceous about 70-66 million years ago. Mosasaurus gave its name to a group of marine lizards - Mosasaurs.

Mosasaurus means 'Meuse lizard', referring to the river near which it was first found. It fed on such prey as seabirds, sharks, large fish, plesiosaurs and even other mosasaurs.

On August 25, 2000, InGen researchers while testing a prototype iron analyzer discovered traceable DNA fragments on a recently uncovered mosasaur specimen. Dr. Henry Wu believed this to be the only way of recreating aquatic organisms without extracting blood from mosquitoes trapped in amber.[1]

Mosasaurus was successfully recreated by InGen under the wing of the Masrani Global Corporation for their new dinosaur park Jurassic World.[2] The species created was Mosasaurus maximus,[3] which many believe to be synonymous with the species M. hoffmannii, but others believe it to be a valid species.

The cloned Mosasaurus retained many features of its original counterpart. It also had a bite force of 13K, one pound higher than the terrestrial predator Tyrannosaurus rex that lived in the same period as the Mosasaurus.[4] The Mosasaurus also had a frill running down its back and lacked a forked tongue as well as lacked a large tail fluke. The clone's colors are mostly greyish-blue with a creamy underbelly.

The Mosasaur lived in a 3 million gallon pool of water located near Main Street[4] known as the Jurassic World Lagoon and visitors could watch it feed on sharks in the Mosasaurus Feeding Show. Visitors could also view her through an aquarium below the lagoon known as the Underwater Observatory to see her.[5] Despite the fact that the Mosasaurus was capable of jumping on to land, she did not seem to actively pursue humans that came close to the tank edges.

Below is a list of size estimates for the cloned Mosasaurus from various sources:

Gray and Zach Mitchell attended the Mosasaur Feeding Show and the Underwater Observatory in which they saw the Mosasaurus consume a shark.[2]

Following the escape of The Aviary's residents from their enclosure, the Mosasaurus devoured a Pteranodon that was flying over its enclosure to capture Zara Young, also eating Zara, who was in the talons of the Pteranodon.[2]

At the end of the battle between the Indominus rex, the park's veteran T. rex, and Blue the Velociraptor, the Mosasaurus beached itself to catch the hybrid in its jaws and dragged it to the bottom of the lagoon, thus killing it.[2]

The Mosasaurus is seen trying to eat Darius Bowman and his group, while they are in the lagoon.[12]

She eats the mercenary Jack during the events of Jurassic World: Fallen Kingdom.[13]

When Darius and the group are leaving the island, the mosasaurs attacks then and wrecks the ship, which leads to the six being stranded on a new island. Yaz has another nightmare of the Mosasaurus busting through the frozen lake and about to eat her, before she wakes up and the nightmare ends.

"Relax. Anything in here would be dead by now."
—Sub Pilot(src)

It is revealed that the individual Mosasaurus seen in Jurassic World has survived the months it has spent on Isla Nublar. It was thought to be dead when the submarine went in to collect a sample of what was left of Indominus rex. The Mosasaurus then ate the sub, along with a mercenary trying to escape on a helicopter, and when the gates were left open, it escaped the lagoon and swam into the ocean. It was last seen trying to eat surfers off of a coast.

The Mosasaurus plays a central role in the motion comic, which tells the story of its attack on surfers on the north shore of Oahu, Hawaii depicted at the end of Jurassic World: Fallen Kingdom.

Mosasaurus makes a brief cameo in the short, eating a breaching great white shark catching a sea lion during the end credits.

The Mosasaurus is seen attacking a crab fishing boat, causing the boat to turn over, and Mosasaurus ate the crew. 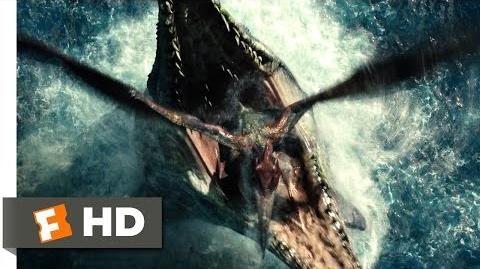 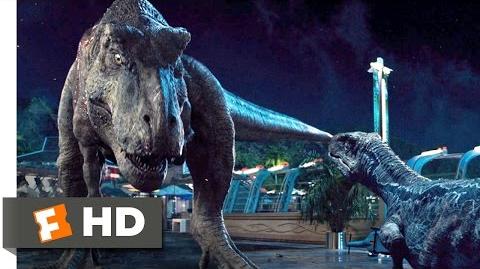 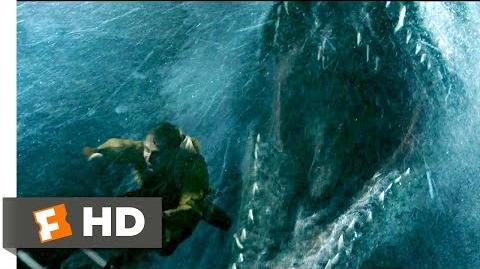 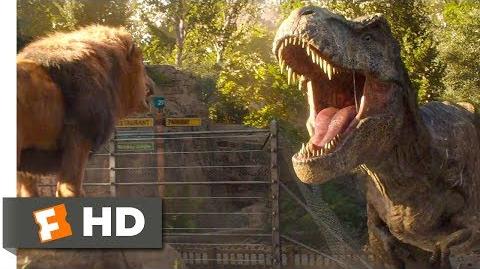 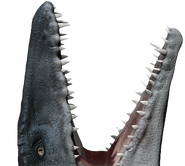 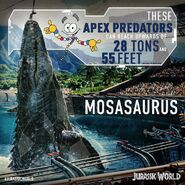 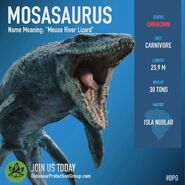 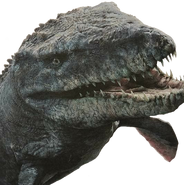 Before making a physical appearance in Jurassic World, there was an idea for Jurassic Park III to feature a mosasaur breeding tank.[14] It was included in the first draft of the script and had concept art done, but was removed in later versions of it.[15]

In the Jurassic World storyboard, Mosasaurus was to be depicted with a serpentine body lacking a tail fluke like pre-2014 restorations and had horizontal stripes covering its body which mosasaurs did not have. The Mosasaurus involvement in the pterosaur attack was to be different as well. Originally, during the pterosaur attack, the monorail that went over the lagoon was to collapse during the attack, dangling over the mosasaur's habitat. When a Pteranodon trying to kill a passenger desperately hanging onto the rapid transit vehicle, the Mosasaur lunges out of the water pulling the Pteranodon down into the water and the monorail with it. Several Pteranodons then proceed to attack the marine reptile in an attempt to save their own, but ultimately the Mosasaurus gets away with its kill. [16]

One early concept of the Mosasaurus' enclosure was a Shark tunnel and in that concept, the Mosasaur was eating a person (possibly having fallen during the pterosaur attack) in the presence of parkgoers.[17] Jurassic World director Colin Trevorrow later came up with the idea of the Mosasaurus Feeding Show during one of his first meetings with Steven Spielberg and Frank Marshall. He mentions that in his original concept there is a separate facility that mass-produces the sharks the Mosasaurus eats via cloning.[18]

Paul Liaw of Industrial Light and Magic who sculpted the Mosasaurus 3D model used turtles, crocodiles, whales, and other animals he could find on the internet as references when creating its underbelly and back. ILM purposely made the Mosasaur in Jurassic World larger than its real life counterpart to make it look big enough for the final fight with Indominus rex at the end of the film.[19]

The sounds of the Mosasaurus were a mix of walruses and beluga whales to give the Mosasaur weight as well as to make it more of a marine animal and not a land animal.[20]

To celebrate the home release of Jurassic World in the United Kingdom on October 19, 2015, Wild Creations (who had previously created animatronic versions of the Jurassic World Velociraptor Pack in the Waterloo Station to promote the film's release in June) created a 7 meter high model of a Mosasaurus preparing to eat a shark and placed it in London's South Bank.[22]