Mosasaurus was added to Jurassic World: The Game on September 30, 2015 as a Legendary surface creature. An additional Gen 2 version was added in May 15th, 2020.

Mosasaurus is unlocked by winning a Mosasaurus pack from either the roulette or if the player places in the top 1% of the Mosasaurus tournament. It was also temporarily available for purchase at a cost of $99.99 USD. Additional individuals can be purchased in the market for 8,000 DNA or found through card packs.

Reward: 3600 Food "Meaning 'Meuse lizard' the Mosasaurus earns its name from the Meuse River, where its first fossil specimens were discovered."

"At 60 feet long, the Mosasaurus was one of the largest and last of the mosasaurids to live."

"The Mosasaurus hunts near the surface, preying on fish, birds, and anything else it can reach (including the Indominus rex)!"

"Discovered in the late 18th century, the Mosasaurus' skull was thought to belong to a crocodile or an unknown species of whale!" 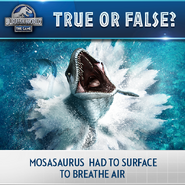 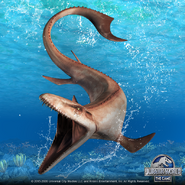 Add a photo to this gallery
Retrieved from "https://jurassicpark.fandom.com/wiki/Mosasaurus/JW:_TG?oldid=239080"
Community content is available under CC-BY-SA unless otherwise noted.