Mussaurus was a dinosaur lived in the Triassic Period, making it one of the earliest dinosaurs, and is believed to belong to the family of dinosaurs from which the huge sauropods eventually evolved. Mussaurus was unlike its huge descendants, however, as it was a small, fast plant-eater.

Mussaurus was found in the mid 1970s and named in 1979 by Jose Bonaparte and Martin Vince. Mussaurus got its name because the first specimens found were babies in a nest and they were about the size of a mouse. Since then, sub-adults and adults have been found that scientists believe are the same species. These specimens show that Mussaurus grew to around 3 metres (10 ft) long. At the time of Mussaurus' discovery, very few dinosaur babies and nests had been found. A lot of information about dinosaur social behavior and the rearing of their young resulted from their discovery. Mussaurus were prosauropods and are thought to hold clues to the origins of the sauropods.

Mussaurus is the first living dinosaur Richard Levine encounters on Isla Sorna when he was guided by Diego.[1]

Mussaurus appears in the Jurassic Park: Redemption series. In part 3 Dr. Backer is put in the Mussaurus cage. Mussaurus acts as one of the main herbivore species seen throughout the Jurassic Park: Redemption story. Along with Triceratops, the Mussaurus are taken out by to graze on Lexxcrops fields in secret. In issue three they are startled by a passing vehicle and run away, towards the town of Glen Rose, Texas. During this time the loose Carnotaurus finds them and chases after them killing one at least in the middle of the town.

They appear to be larger than normal Mussaurus, which only reach about 10 feet in length (3 metres). The size of the animals varies throughout the comics though. In issue 3, the Carnotaurus picks one up in its jaws, but in issue 4 (see first image) they are seen to be much larger than in the previous issues.

A figure of Mussasaurus was released as part of the Dino Rivals line for the toy-line for Jurassic World: Fallen Kingdom. This is the first time it has ever appeared in any Jurassic Park toy set. The coloration for this figure is a light blue with a mute lemon yellow underbelly and black stripes. A repaint of this figure is set to be released as part of the Primal Attack line. The coloration of this new figure is brown with black stripes and a yellow underbelly. 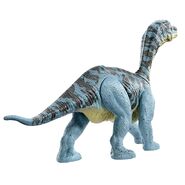