Jurassic Park: The Game
Further up the tunnel, Oscar is still hiding from the Raptors. He climbs onto some metal scaffolding above him, further out of the Raptors' view.

Yoder and Nima walk around the corner through the tunnels, when Nima spots some glowing eyes in the darkness. Nima won't go any further until she has more light, so Yoder decides to see if he can turn the lights on. Unfortunately, he turns the emergency lights off, which allows Oscar to sneak further up the tunnels, following the Raptor below him.

Elsewhere, Jess, Gerry and Laura are standing in the dark, where Gerry believes that the back up generator has lost all its power. When Yoder tries to fix it, sparks fly out of the system, causing the Raptor to look up, ultimately revealing Oscar's location. Artie Bridges pre-recorded radio show plays in the background, and so a song begins playing right when Oscar engages the raptor in a hand-to-hand brawl. The song is called Don't Remember You. Just after he kills it with his knife, Nima and Yoder show up.

Laura enters a code into the system and turns off the sound and music, stopping the radio show.

Yoder tells Oscar of the plan behind the embryos. While one of the two takes the survivors off the main land, whoever goes with Nima cashes in the money for the embryos. In order to do so, they need to call for a helicopter. They travel further up the tunnels to see what they come across. 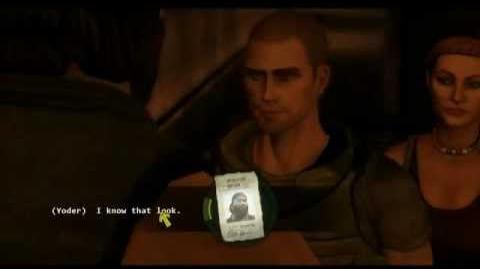