Start a Wiki
watch 01:48
The Loop (Movies)
Do you like this video?
Nasutoceratops is creatable in Jurassic World: The Game as a Rare herbivore.

It is unlocked by completing the Earth Shattering event. More individuals can be purchased in the market for 550 DNA or found through card packs.

As of September 30th 2015, a level 40 Nasutoceratops can be fused with a level 40 Pachycephalosaurus to make the hybrid Pachyceratops.

"Did you know that Nasutoceratops means 'large-nosed horn-face'? It has large horns that resemble those of cattle!"

"The Nasutoceratops originally lived in the American Southwest, in what is now the state of Utah."

"During the late Cretaceous Period, the Nasutoceratops lived on a large floodplain in a wet and humid climate."

"The Nasutoceratops has a large frill lined with low crescents of bone instead of spikes." 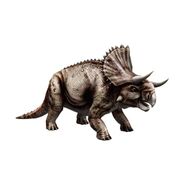 Add a photo to this gallery
Retrieved from "https://jurassicpark.fandom.com/wiki/Nasutoceratops/JW:_TG?oldid=236295"
Community content is available under CC-BY-SA unless otherwise noted.