Alive
Nick Van Owen is a photographer who accompanied Eddie Carr and Ian Malcolm to Isla Sorna in order to document dinosaurs. He was handpicked by John Hammond because he had done many jobs in combat situations. He was also an active environmentalist and a member of the Earth First! and Greenpeace organizations.

Nick Van Owen formerly worked for Nightline, where he visited war-torn counties like Rwanda and Bosnia. Hammond sought him out to be part of a research team that was traveling to Isla Sorna to document the dinosaurs there. Ian Malcolm meets both Eddie Carr and Nick while the research team's vehicles are being prepared, and Nick introduces himself as a jack-of-all trades photographer aligned with Greenpeace.

They later land on the island and find Sarah Harding, Ian's girlfriend, taking photographs of a Stegosaurus herd.

When the InGen Hunters arrived on Isla Sorna and captured many dinosaurs, Nick mentions that Hammond also hired him to sabotage Ludlow's attempt to ship dinosaurs from the island. Wielding a pair of pliers, he and Sarah infiltrated the Hunter's Camp and unlocked the locks on the dinosaur cages, leading to the destruction of all the hunter's communication's equipment. Later on, Roland came and found a shattered lock. That drew his attention to noticing that someone else was on the island.

Nick brought the infant Tyrannosaurus rex captured by the hunters to the trailer so its broken leg could be mended. Sarah reprimands Nick for potentially attracting the baby's parents, but helps Nick treat its leg anyway. The adult Tyrannosaurs attack the trailer and the team are forced to release the baby. Once the T. rex parents had their baby back, they attacked the trailers and pushed it off a cliff before leaving. When Eddie went to save them, he managed to secure a rope for Nick, Ian and Sarah to escape. However, he was eaten by the T. rex parents when they returned to stop his interference.

The InGen Hunters rescue the Gatherers from the cliff and they are forced to travel together to the Worker Village to call for help, since both groups had their equipment wiped out. When he found out that hunter's leader Roland Tembo came to the island to hunt a male Tyrannosaurus, Nick decided to disable Roland's 600 Nitro Express Double Rifle by stealing its bullets. After seeing Roland put the rifle down and leave it temporarily, Nick pulled the bullets and left only empty casings in the chambers.

Later while sleeping in a makeshift camp, both hunters and gatherers are once again attacked by the Tyrannosaurs. Nick pulls Sarah and Kelly behind the waterfall to get out of the T. rex reach. Roland tries to shoot the T.rexes, but fails due to Nick's thievery. The remaining hunters flee, with the Gatherers following them.

After the Velociraptor attack on the InGen hunters in the Long Grass, Nick finds Ajay's rucksack. They are forced to run in the long grass to avoid the raptors. Once the Gatherers reach the Village, Nick enters the village alone ahead of the others. Nick finds the radio in the Operations Building and sends the distress call to InGen Harvest base, telling them that the survivors are in mortal danger and need immediate evacuation.

After Ian, Sarah, and Kelly avoid pursuing Velociraptors , Nick joins them to escape the island by boarding the rescue helicopter sent by InGen. While onboard, he pulls out the two 600 Nitro Express rounds he stole from Roland and drops them on the floor.

Nick along with Kelly left before Ian and Sarah went to interfere in Ludlow's plans, and therefore, had no part in the San Diego Incident after he headed home.

Nick van Owen initially seems to have an amicable, cocky, almost comedic persona when he first introduces himself to the group; bragging about having been a war photographer and joining Greenpeace to flirt with the primarily female operated organization. While in awe of the dinosaurs, he does care quite a bit about them; as shown by his insistence on sabotaging the InGen hunter camp to set numerous herbivores free and his refusal to ignore the screaming cries of pain from the infant Tyrannosaurus. The latter of which he brought back to give medical care even though both Sarah Harding and Ian Malcolm warned him of the danger. Nick holds a very pessimistic view of sports hunters, seeing them as the only hunters who hunt when they're not hungry. Still, he isn't misanthropic, as he did help lead the combined InGen teams and didn't quarrel with them outside of a scuffle with the very antagonistic Dieter Stark.

He does show a degree of compulsiveness, which came in handy when he was the first to set out to sabotage the hunter camp; but had unintended consequences when he took the opportunity to sabotage Roland Tembo's elephant gun in an effort to deny the big game hunter his trophy.

"Do you see any resemblance here?" - to Eddie about Kelly Malcolm and Ian

"Uh, I think I should tell you guys; Hammond told me these people might show up. I thought we'd be finished by the time they got started, but... in case they weren't he did send a backup plan. - to Sarah Harding

"Well, that's one souvenir they won't be taking with them." - Right after this, he drops the bullets he stole from Roland's gun on the floor of the helicopter.

"Competition's over, close the entries, I'd like to thank everybody who lost." - Nick as he, Eddie, Malcolm, and Sarah walk back to their camp after their encounter with the Stegosaurus. 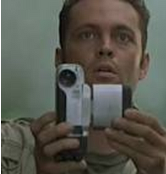