Nodosaurus (meaning "knobbed lizard") was a genus of herbivorous ankylosaurian dinosaur from the Late Cretaceous, the fossils of which are found in North America. One incomplete specimen has been discovered in the Frontier Formation of Wyoming. One of the first armored dinosaurs to be discovered in North America, Nodosaurus was named by Othniel Charles Marsh in 1889.

Nodosaurus was featured on the website Jurassic Park Institute now archived on Dinopedia.

Nodosaurus appears as number 70 of the Herbivore Twos that can be created in Jurassic Park III: Park Builder.

Nodosaurus appears in Jurassic World: Evolution. The model of the Nodosaurus seems to be based on another genus of nodosaurid dinosaur called Borealopelta (although this is likely due to the low amount of fossil material of Nodosaurus). 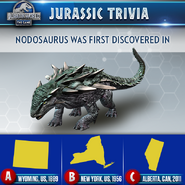