Nundasuchus can be created in Jurassic World: The Game as a Rare amphibian.

It is unlocked by completing Battle Stage 17. More individuals can be purchased in the market for 700 DNA store or found through card packs.

As of December 7, 2016, a level 40 Nundasuchus can be fused with a level 40 Tuojiangosaurus to make the hybrid Nundagosaurus. 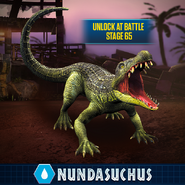 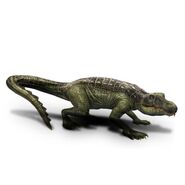 Add a photo to this gallery
Retrieved from "https://jurassicpark.fandom.com/wiki/Nundasuchus/JW:_TG?oldid=236299"
Community content is available under CC-BY-SA unless otherwise noted.