Olorotitan is an unlockable dinosaur in Jurassic World Evolution added in the Secrets of Dr. Wu update on November 20, 2018.

Olorotitan fossils are unlocked  by achieving a high enough rating with the Science Division on Isla Muerta East.

Olorotitan is a hadrosaur which eats moderate amounts from ground herbivore feeders.

They live in large social groups to survive predation and like to have dinosaurs from other species nearby.

They like good sized grassland areas with a slightly smaller coverage of forest.

These dinosaurs are vulnerable to all predators.

Olorotitan was a large herbivore from the Late-Cretaceous. The name Olorotitan means 'gigantic swan', referring to its fan-like crest.

In 2003, an Olorotitan skeleton was discovered in the banks of the Amur River in Russia. Buried under a mudslide, the specimen was complete, and preserved well enough, that scientists were able to study the animal's brain structure. A carnivorous dinosaur's tooth was also found lodged in the Olorotitan's tail bones.

Based on the proximity of known fossils to remains from turtles and crocodilians, Olorotitan probably lived in woodland and swamp areas. 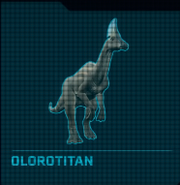 Add a photo to this gallery
Retrieved from "https://jurassicpark.fandom.com/wiki/Olorotitan/JW:_E?oldid=235479"
Community content is available under CC-BY-SA unless otherwise noted.