Ornithocheirus (meaning "bird hand") is a genus of pterosaur that lived in Europe during the Late Cretaceous. It is famous for its disputed taxonomy with many of its species being reclassified as other genera, such as Tropeognathus.

Ornithocheirus appears in Jurassic World: The Game as a limited tournament creature.

A prototype toy of Ornithocheirus was made for the short-lived preschool toy line Jurassic Park Junior, but it never had an official release.[1] The prototype had a toothless beak, a feature the real Ornithocheirus never had. 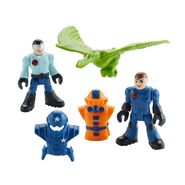